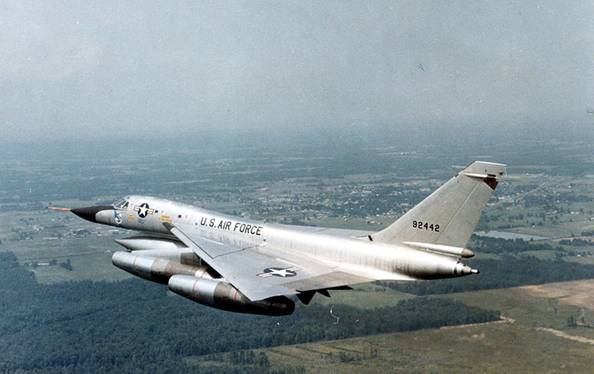 The B-58 “Hustler” was the world’s first supersonic bomber. Designed as a strategic bomber and reconnaissance weapon, the B-58 was first flown in November, 1956. An impressive technical achievement, the B-58 produced performance improvements over the fastest existing bombers equivalent to the previous 50 years of aircraft design and manufacture.

Designed using a “minimum size” concept, the B-58 employed a wasp-waisted fuselage and a disposable weapons pod under the aircraft rather than an expansive cargo bay inside the aircraft. Both the weapons payload and some fuel for the aircraft was carried in the disposable pod, vastly improving the bomber’s performance by eliminating a need for it to carry empty space after weapons were deployed or fuel was depleted. Dropping the pod dramatically increased the survivability of the B-58 in a hostile situation.

The struts of the B-58 landing gear were unusually long compared to other bombers in order for them to safely clear the weapons pod. In addition to weapons and fuel, the pod could carry cameras or electronic countermeasure equipment. A B-58 aircraft was modified to carry a prototype Air-Launched Ballistic Missile (ALBM) prototype named ALBM-199C. In this application, the B-58 was flown out of Eglin Air Force Base, Florida over Cape Canaveral waters. The ALBM-199C was dropped from the B-58 and fired over open Atlantic Ocean waters.