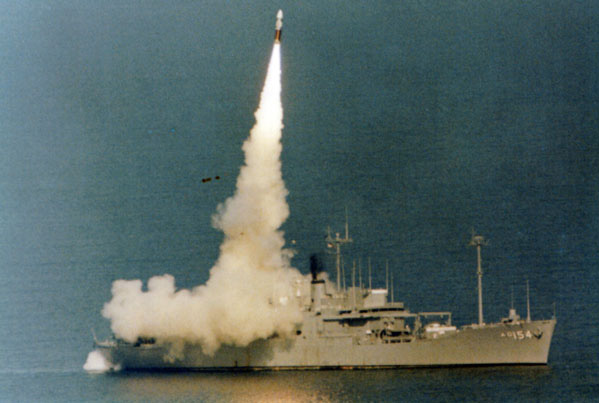 Vehicles Launched: Polaris A1, Polaris A2, Polaris A3, Poseidon

Completed in February, 1954 the ship that would become the Observation Island was activated as a post World War II mariner class merchant ship. The ship’s original name was Empire State Mariner. After less than one year of duty, the ship was placed in the National Defense Reserve Fleet in November, 1954. On September 10, 1956 the ship was transferred to the U.S. Navy.

At the Norfolk Naval Shipyard, the ship was converted into the first U.S. Navy ship to incorporate a fully integrated Fleet Ballistic Missile (FBM) system.

With the exception of the installation of a fin-type roll stabilization system, no major changes were made to the ship’s hull or engineering system during the conversion. However, extensive modifications were made to the superstructure and holds to accommodate FBM weapons system components.

These included a complete prototype submarine-type missile firing control, navigation and launching system. An instrumentation system for providing optical and electronic data was also installed. The ship was initially outfitted with one missile launching tube, but a second was later added.

This allowed the Observation Island to act as an important platform for the first sea-based test launches of FBM weapons, including Polaris A1, Polaris A2, Polaris A3 and Poseidon. Although submarines ultimately made up the complete FBM fleet, Observation Island was the prototype for proposed ship-board FBM systems.

The Observation Island received her U.S. Navy commission on December 5, 1958. Since the ship was essentially a floating launch pad, it first fulfilled a vital role in conducting at-sea test launches to validate and refine FBM systems before they could be safely tested aboard submarines.

Once submarine-based FBM launches began, Observation Island still played an important role by providing at-sea support for these launches. Support was primarily provided in the form of optical and electronic data gathering as well as communications relay transfer between the submarines and range control operators on Cape Canaveral.

In addition, Observation Island acted as a site where dignitaries and members of the news media could view submarine-based FBM launches. Perhaps the most notable guest aboard the Observation Island was President John F. Kennedy, who viewed a Polaris A2 launch on November 16, 1963 – just six days prior to his death.

One of the Observation Island’s highlights was its launch of a Polaris A2 missile on May 7, 1971 off the coast of the Korean Peninsula. The missile acted as a target for a Sprint missile launched from the Kwajalein Atoll. The Sprint missile successfully intercepted the Polaris A2 in flight. Many believe that this event led Soviet Premier Leonid Brezhnev to sign the first START missile treaty with the U.S. thus avoiding an escalating conflict. It should be noted that the crew of the Observation Island faced great peril during this mission, given their close proximity to both North Korea and the Soviet Union.

After completing its role in the Poseidon missile program, the Observation Island was decommissioned on September 25, 1972. It was again placed in the National Defense Reserve Fleet. On August 18, 1977 the Observation Island was again acquired by the Navy, this time for conversion to a missile range instrumentation ship. The conversion was started in 1979 and completed in April, 1981. The primary conversion features were the fitting of a Cobra Judy phased array radar at the aft, and two radar spheres atop the superstructure.

The Observation Island fulfilled an active role for many years, supporting military and civilian range instrumentation needs in the Pacific Ocean. This included the tracking of U.S. rockets and missiles launched over the Pacific range, as well as rockets and missiles launched by other nations. The ship was ultimately removed from service on March 25, 2014 and struck on March 31, 2014.