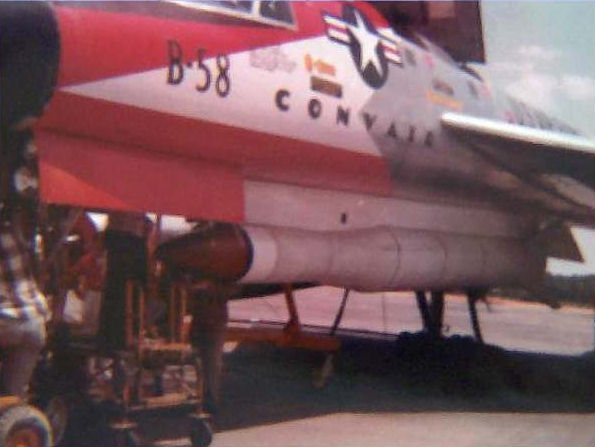 Like the Martin Company Bold Orion (designated ALBM 199-B) ALBM 199-C represented a short-term research and development program funded by the Air Force in the late 1950’s to determine the feasibility of launching ballistic missiles from aircraft. ALBM 199-C was a joint venture of Convair and Lockheed. Since it was designed to be launched from B-58 Hustler aircraft, the missile has been referred to in anecdotal accounts as the “B-58 ALBM” (pronounced B-58 AL-BUM). Just three of the ALBM 199-C missiles were launched over Atlantic Ocean waters off Cape Canaveral between September 5, 1958 and June 4, 1959. Each was launched from a B-58 Hustler, which carried one missile slung under the center of the aircraft. The B-58 Hustler flights originated at Eglin Air Force Base, Florida, not the Cape Canaveral Skid Strip. The missile had a range of 185 miles at a maximum altitude of 263,000 feet at a maximum speed of Mach 6 (six times the speed of sound). It employed a solid-fueled Thiokol TX-20 motor which produced a thrust of 50,000 pounds with a burn time of 27 seconds. ALBM 199-C test flights, although scarce in number, produced results that were applied to the Skybolt missile program.