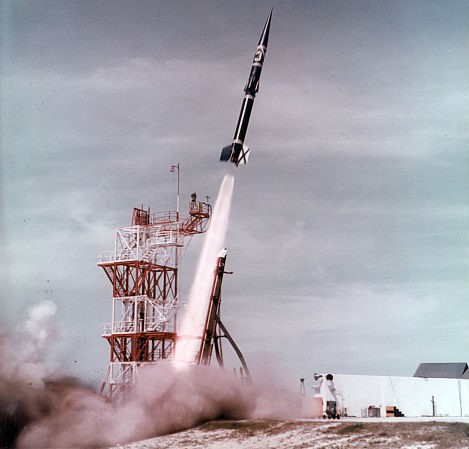 Alpha Draco, also known as Model 122B Test Vehicle, was built by McDonnell Aircraft in support of Air Force high-altitude research activities. Just three were launched from Cape Canaveral. Launched from a mobile trailer/erector launcher designed for the Honest John missile, Alpha Draco was a two-stage solid-fueled rocket. It carried an aeroballistic nosecone payload. Although the rocket was launched like a ballistic missile weapon, the payload was designed to reach a high altitude, then be placed on a level flight path by utilizing its own lifting characteristics, which could be done without the use of wings. Since the payload could then glide toward its target unpowered, without reaching space altitudes, a weapon utilizing this capability could theoretically carry a heavier weapons payload than a purely ballistic missile weapon. It would not need to fly as high to be able to cover the same distances.

The concept was known as boost-glide since the first and second stage boosters would carry the payload to its desired altitude, then the payload would glide toward its target. It had been called the skip-bomber by German rocket scientists during World War II, although the Germans could never thoroughly test the theory. Alpha Draco, on the other hand, successfully tested the technique, which had been studied and refined carefully by the National Advisory Committee for Aeronautics (NACA) well into the 1950’s. In a typical flight profile, the Alpha Draco was launched on a nearly horizontal angle of about 100 degrees. The first stage booster shut down and was jettisoned at an altitude of about 42,000 feet, then the unpowered second stage and payload continued a ballistic trajectory. The second stage fired at an altitude of about 65,000 feet.

The second stage burned out at an altitude of about 92,000 feet about 40 miles downrange of the launch site. The aeroballistic payload, which remained attached to the second stage, then achieved a nearly level glide path, gradually decreasing its altitude until being programmed to begin a terminal dive and impact the ocean about 240 miles downrange of the launch site. In addition to validating the boost-glide concept, Alpha Draco yielded important data on the aerodynamics of hypersonic flight as well as materials that can withstand high temperatures. The payload employed a pioneering slow roll as it glided to help distribute heat evenly throughout the structure. Although short-lived, the program was valuable in U.S. missile technology evolution.