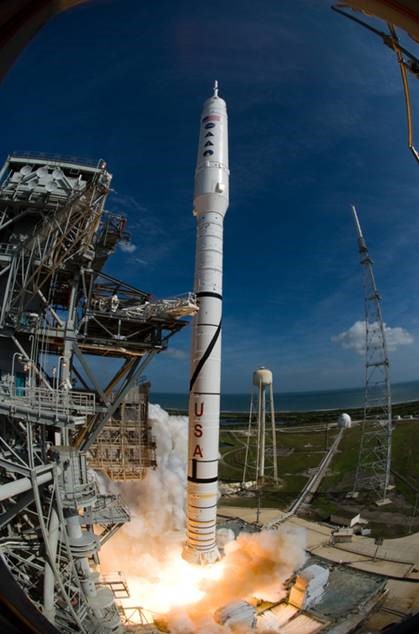 Ares I-X was a single-stage test vehicle designed to validate flight dynamics of the Ares I, a rocket intended to carry astronauts into space as part of the NASA Constellation program, a follow-up to the Space Shuttle program. The first and only Ares I-X rocket was launched from Kennedy Space Center Launch Pad 39B on October 28, 2009. The Ares I-X consisted of a powered four-segment solid rocket booster (SRB) as first stage. This stage was directly adapted from the Space Shuttle SRB. The rocket also carried an unpowered fifth segment SRB simulator, an upper stage simulator (USS), simulated Orion Crew Module (CM) and simulated Launch Abort System (LAS). The rocket carried approximately 700 sensors to measure flight dynamics. During the 2-minute test flight, the vehicle flew to a maximum altitude of 28 miles. The first stage was recovered via parachute about 150 miles downrange of the launch site. NASA reported that all test objectives were met, although the first stage was damaged when it impacted the Atlantic Ocean, due to a recovery parachute malfunction.