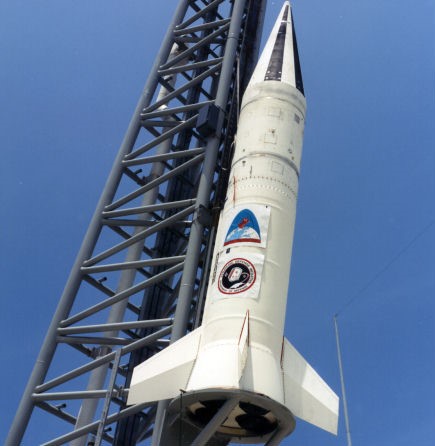 Aries I was a solid-fueled rocket built by Orbital Sciences Corporation. The rocket was launched twice in support of Strategic Defense Initiative Office (SDIO) research efforts. The launches were conducted under the Red Tigress program, an effort to identify and track enemy missiles. Red Tigress I was launched on August 20, 1991. The mission was a failure as the rocket developed severe guidance difficulties and was destroyed by the Range Safety Officer and Launch Plus 23 seconds. Launch of Red Tigress II was delayed as a result, but was successfully conducted on October 14, 1991. Tracking Field Experiments (TFE) were successfully completed during Red Tigress II. In addition to tracking multiple small payloads and decoys, the TFE experiments established a stabilized track of the rocket’s plume using lasers and cameras.

Little is remembered about the Aries I rocket itself, with the exception of sketchy details about its components. The rocket consisted of a Talos first stage, Sergeant second stage and M57A1 third stage. The first stage was unguided and employed wind weighing techniques through second stage ignition. The second stage was guided by a combination of air and jet vanes mounted on the aft skirt. The third stage was guided by a nozzle control unit and four steerable nozzles. The rocket employed separation systems utilizing pyrotechnics release for the three stages, and also the nose separation and deployment of the payload. Both the rocket and the payload utilized standardized guidance and attitude control.