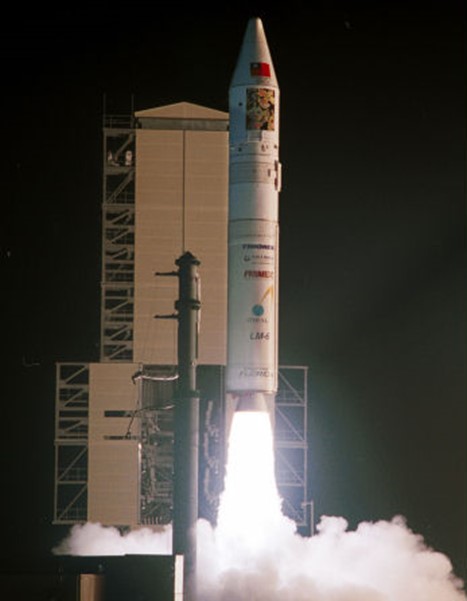 What eventually became known as the Athena rocket program (not to be confused with the Atlantic Research Corporation Athena ballistic missile research program of the mid-1960’s) began in January, 1993 as Lockheed decided to capitalize on its rocketry potential. Lockheed believed that the timing was right to apply its cumulative solid-propellant Polaris, Poseidon and Trident missile technology to the ever-emerging field of launching relatively lightweight payloads into space. The initial vehicle program that emerged was named Lockheed Launch Vehicle (LLV). After Lockheed merged with Martin Marietta to form Lockheed Martin, the program was renamed Lockheed Martin Launch Vehicle (LMLV). The core launch vehicle was named LMLV-1, with a larger version named LMLV-2. LMLV-1 was later renamed Athena I, while LMLV-2 was renamed Athena II. A third version, called the Athena III, has also been introduced but to date has not been launched from Cape Canaveral.

The Athena I was a two-stage, solid-fueled rocket capable of carrying a maximum 1,750-pound payload into low-Earth orbit. A Thiokol Castor 120 solid rocket motor served as the Athena I first stage. The first stage was 28 feet, 9 inches long by 7 feet, 9 inches wide and burned Class 1.3 Hydroxyl-terminated polybutadiene (HTPB) solid propellant. The first stage could produce a thrust of 435,000 pounds at launch. The first stage motor was housed in a composite case and was steered by blowdown cold gas-powered hydraulic thrust vector control (TVC) actuators. In a typical flight profile, the first stage burned out about 90 seconds after launch, after which the vehicle began an unpowered coast period. The first stage remained attached to the vehicle during this coast to provide aerodynamic stability.

The OAM could be ignited, shut down and restarted to perform orbital injection attitude corrections, roll control, velocity trim and orbit circularizing maneuvers. The OAM could carry a maximum 960 pounds of hydrazine liquid fuel. After the OAM completed its role, it separated from the payload and executed a collision avoidance maneuver away from the payload until its fuel was depleted. The Athena I employed a standard payload fairing which was 14 feet, 1 inch long by 6 feet, 6 inches wide. Considered a “stack and shoot” type of launch vehicle, the Athena I was designed to be launched in as little as 30 days after the first stage arrived at the launch site.