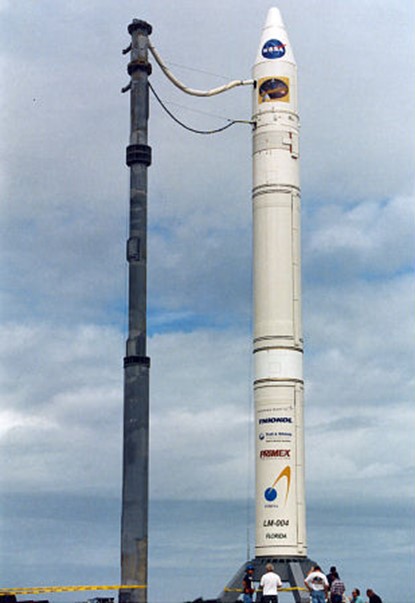 Following separation of the third stage, an Orbit Adjust Module (OAM) was ignited. The OAM housed an attitude control system and avionics subsystem, which incorporated guidance and navigation equipment, batteries, telemetry transmitters and command destruct receivers and antennas. A maximum load of 960 pounds of hydrazine liquid fuel powered the OAM attitude control system, which performed orbital injection corrections, roll control, velocity trim and orbit circularizing maneuvers. The OAM attitude control system was manufactured by Primex Technologies. Located directly beneath the payload itself, the OAM eventually separated from the payload and performed a contamination and collision avoidance maneuver until its hydrazine fuel is depleted. The maneuver was intended to protect the payload from any potential damage.

The Athena II offered two sizes of payload fairings and three sizes of payload adapters which could be interchanged to accommodate a number of different sized payloads. Utilizing what its manufacturer called a “stack and shoot” approach to launching payloads, the Athena II could be prepared for launch in just 30 days after its first stage arrived at the launch site. The rocket was capable of carrying a maximum 4,350-pound payload into low-Earth orbit or a maximum 3,200-pound payload into polar orbit. It was also capable of sending small payloads into interplanetary trajectory, as was proven by the Athena II launch of the NASA Lunar Prospector on January 6, 1998. The Lunar Prospector weighed 652 pounds and successfully achieved lunar orbit.