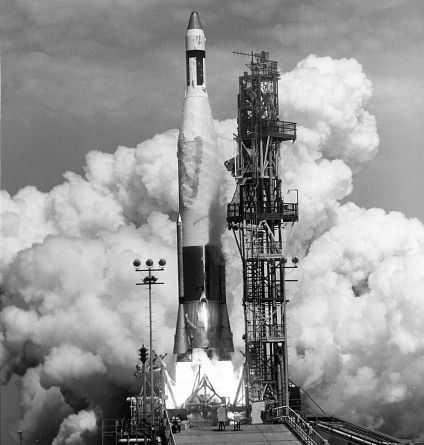 The Atlas-Agena A was a two-stage rocket using the Atlas D missile as a first stage and the Lockheed Agena A as a second stage. The Agena family of second stages originated in the Atlas-Hustler concept proposed by the U.S. Air Force. Since the Agena A was designed to be tailor manufactured for each flight, it proved impractical and was never used by NASA. The Agena A was 19 feet, 4 inches long and 4 feet, 11 inches wide. It employed a single-start Bell engine producing 15,200 pounds of thrust. The Bell engine was manufactured in two models for the Agena A. The Model 8001 version burned JP-4 jet fuel while the Model 8048 version burned IRFNA/UDMH liquid fuel. The total vehicle was capable of carrying a 5,000-pound payload to low-Earth orbit.