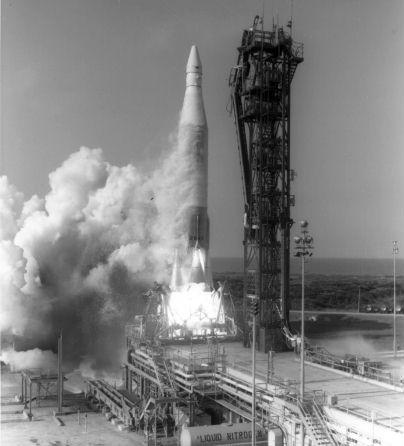 The Atlas Antares rocket consisted of an Atlas D missile as first stage mated to an Antares second stage. The rocket was used in support of the NASA Project FIRE, standing for Flight Investigation of Re-entry. Project FIRE 1 was launched from Cape Canaveral on April 14, 1964, while Project FIRE 2 was launched from the Cape on May 22, 1965. The Project FIRE payload consisted of an instrumented cone styled as a miniature Project Apollo space capsule, designed to mimic the re-entry characteristics of proposed Apollo re-entry vehicle. Particular attention was paid to the temperature and thermal characteristics of the re-entry vehicle. The two flights were suborbital, with the payload launched into space and then pointed downward for an unpowered re-entry through the atmosphere. Results were important to the upcoming Apollo program.