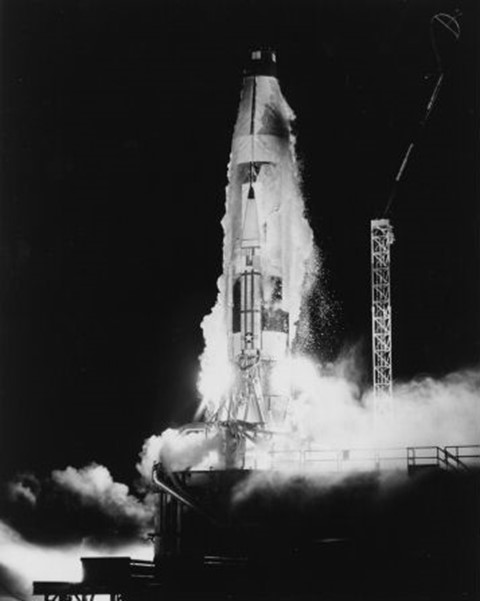 Originating as the X-12, Atlas B was the name given to the second series of Atlas missiles delivered to Cape Canaveral for flight testing. Since the Atlas B missile was built to test booster and nose cone separation as well as the overall propulsion system, longer-range flights were needed. This required the Atlas B to employ an operating one and one-half stage booster/sustainer engine combination. In order for a B Series Test to be considered completely successful, five events called “Marks” needed to be completed. Mark One was booster engine shutdown, Mark Two was booster engine separation, Mark Three was sustainer engine cutoff, Mark Four was vernier engine cutoff and Mark Five was nose cone separation. To do this, the Atlas B needed to fly nearly ten times farther than the Atlas A.

The Atlas B employed two North American booster engines and one North American sustainer engine. The sustainer engine was located in between the two booster engines. The engines each had a thrust of 120,000 pounds at liftoff. Like the Atlas A, the missile used two vernier engines to control roll and trim final velocity. All engines were fed by liquid oxygen/RP-1 (kerosene) liquid propellant. Like the Atlas A, the Atlas B carried a semi-inertial guidance system supported by radio commands from ground stations. All engines ignited at liftoff. At an altitude of about 16,000 feet, the Atlas B performed a pre-programmed turn to a ballistic trajectory. About two minutes into the flight, the two booster engines shut down and were jettisoned. The sustainer engine remained firing for about an additional two minutes, staying attached to the missile body to its final water impact.

Following sustainer engine cutoff, the two vernier engines remained firing for about 30 seconds. Following cutoff of the vernier engines, the nose cone separated, continuing on toward its target without further guidance. An Atlas B was first launched from Cape Canaveral on July 19, 1958. The missile lost thrust about 43 seconds into the flight, exploded and fell into the Atlantic Ocean about three miles downrange. In stark contrast, an Atlas B launched from Cape Canaveral successfully completed the first full-range Atlas test flight on November 28, 1958. The missile ended its flight about 6,000 miles downrange of the launch site.