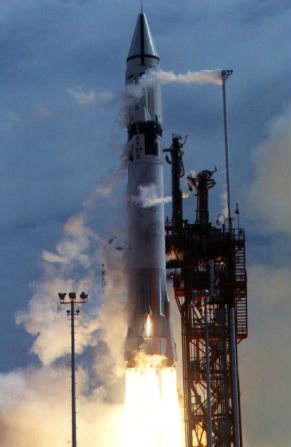 The name Atlas-Centaur has come to be applied as a generic name for a variety of Atlas-based first and upper stage combinations which evolved from the Atlas D and remained in use for many years. The first Atlas-Centaur, introduced in 1962, employed the Atlas D missile as first stage and the Convair-developed Centaur as second stage. The Centaur was originally designed to support the launch of the Advent geostationary communications satellite. The original Centaur, called Centaur A, employed two Pratt and Whitney engines which produced a total thrust of 30,000 pounds. The Centaur engines burned a combination of liquid oxygen and liquid hydrogen. Improved Centaur second stages designated Centaur B and Centaur C were all initially flown in a similar configuration prior to the debut of an upgraded Atlas-Centaur launch vehicle in 1966. For this reason, early Atlas-Centaur rockets may more accurately be referred to as Atlas-Centaur A, Atlas-Centaur B or Atlas-Centaur C, depending on the type of Centaur upper stage flown.