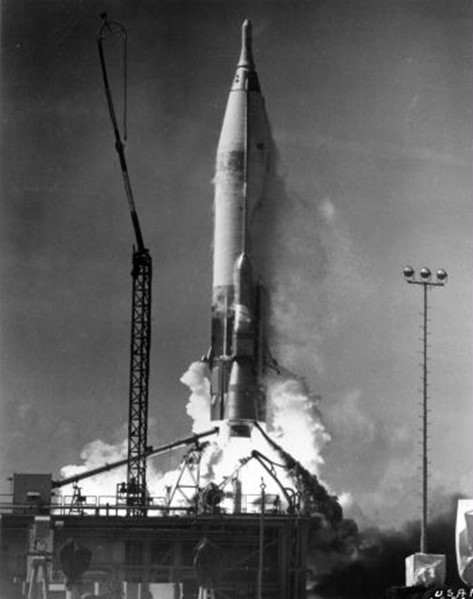 Essentially an upgraded and modified Atlas D missile, the Atlas E carried an uprated propulsion system which increased liftoff thrust by about 8% over the Atlas D and resulted in a greater range for the missile. Another important addition to the Atlas E was an all-inertial guidance system which afforded a significant technical advantage to the operational Atlas ICBM fleet, effectively removing pressure from ground stations during flight. On July 6, 1961 a Cape-launched Atlas E completed a successful test flight of 9,054 miles. This established a distance record for the Atlas ICBM which was never broken. Atlas E was specifically designed to be housed in underground facilities at Fairchild Air Force Base, Washington, Forbes Air Force Base, Kansas and Warren Air Force Base, Wyoming. Atlas E missiles were stored horizontally in underground hardened shelters and needed to be raised to a vertical position then fueled prior to launch. These shelters were nicknamed “coffins” and the Atlas E was nicknamed “coffin bird” because the missile was often covered with a thin layer of earth while in storage. Covering the Atlas E missile body with earth, much as an actual coffin would be covered with earth during burial, provided about 25 pounds per square-inch of pressure on the missile body, helping to prevent overpressure when the missile was in storage.