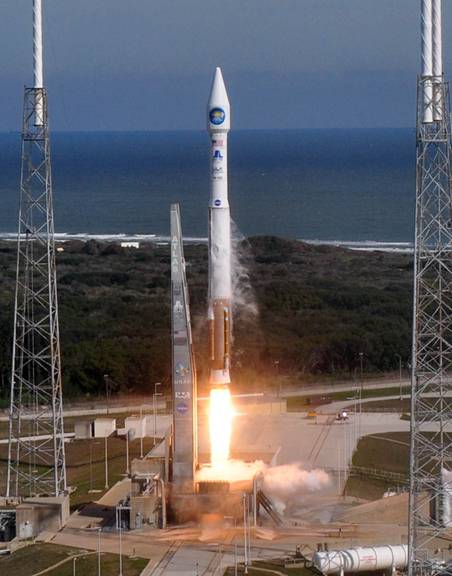 Designed as a product of the Air Force Evolved Expendable Launch Vehicle (EELV) program, Atlas V is the latest evolution in the Atlas program. Originally introduced by Lockheed-Martin, the rocket is now operated by United Launch Alliance, a joint venture of Lockheed-Martin and Boeing. Atlas V is a two-stage launch vehicle. The first stage is comprised of a Russian-built RD-180 engine which burns a combination of liquid oxygen and RP-1 (kerosene) fuel. The first stage can produce a liftoff thrust of 933,406 pounds. The first stage can be augmented by up to five Aerojet strap-on solid rocket boosters. Each booster can produce a thrust of 285,500 pounds. The Atlas V second stage is comprised of either a one-engine or two-engine RL-10A Centaur upper stage. The Centaur burns a combination of liquid hydrogen and liquid oxygen. The one-engine Centaur can produce a thrust of 22,290 pounds. The two-engine Centaur can produce a thrust of 41,592 pounds. There are a number of variants of the Atlas V, based upon the size of the payload fairing, the number of solid rocket boosters and the second stage Centaur configuration. Figuring all of the available combinations, the Atlas V can carry a 21,490-pound to 64,860-pound payload to Low-Earth Orbit, or a 10,470-pound to 28,660-pound payload to Geosynchronous Transfer Orbit.