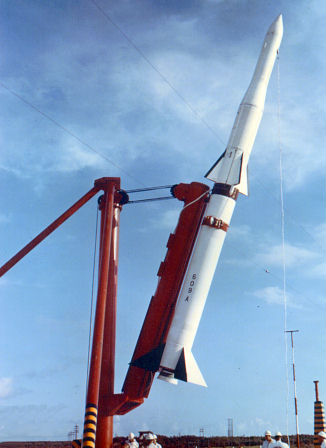 The Scout rocket was conceived in 1958 by NACA, which was exploring the development of a small, lightweight vehicle to launch satellites or perform high-altitude research relatively inexpensively. The Scout program was assumed by the NASA Langley Research Center upon the creation of the space agency in October, 1958. In less than one year, the Scout design emerged as a four-stage vehicle capable of being used as a sounding rocket or lightweight satellite launcher. NASA decided that all four stages would be solid-fueled, citing the relative simplicity and reliability of previously demonstrated solid-fuel technology. In April, 1959, a production contract for the Scout rocket was issued to the Astronautics Division of Ling-Temco-Vought, a subsidiary of the Chance Vought Corporation.

The Scout first stage, called Algor, was controlled by the moveable outer tips of four stabilizer fins in conjunction with four exhaust deflector vanes. It burned for 40 seconds and could produce a thrust of 115,000 pounds. This first stage concept was applied directly from the U.S. Navy Polaris missile program. The Scout second stage also had its roots in a military program. The Scout second stage, called Castor, originated with the U.S. Army Sergeant rocket program. It burned for 39 seconds, was stabilized by hydrogen peroxide jets and could produce a thrust of 50,000 pounds.

The Scout was able to carry a 50-pound payload on a ballistic trajectory to an altitude of 8,500 miles or carry a 150-pound payload into low-Earth orbit. The original NASA Scout was modified for specific U.S. Air Force applications under the designations Blue Scout I, Blue Scout II and Blue Scout Junior. The Blue Scout Junior, designated XRM-91, represented a major revision of previous Scout rockets. It was introduced to support smaller, more streamlined scientific research activities of the U.S. Air Force. The Castor second stage and Antares third stage used on Scout, Blue Scout I and Blue Scout II rockets were adapted to become the first and second stages, respectively, of the Blue Scout Junior. Each of these stages was modified to carry four fixed, triangular fins at their aft ends. These fins provided stabilization during flight.

A new third stage, called Alcor, was introduced. It burned for 30 seconds and could produce 8,000 pounds of thrust. A new fourth stage, called Cetus, could produce a maximum thrust of 900 pounds. The rocket, which did not carry any guidance equipment, was launched from a beam used previously for U.S. Army Sergeant missiles. The Blue Scout Junior was spin-stabilized from launch. Spin rockets on the second stage were fired at launch and stabilized the Blue Scout Junior at three revolutions per second. This motion was sufficient to keep the third and fourth stages on course following burnout of the first two stages. Launches of all classes of Scout rockets from Cape Canaveral ceased in 1966. However, both the U.S. Air Force and NASA continued to refine the vehicle. The U.S. Air Force introduced the XRM-92, called the Air Force Scout, a four-stage rocket similar to the original NASA Scout. NASA continued to use a modern version of the Scout for launching lightweight scientific payloads, although all of these launches were conducted from Vandenberg Air Force Base, California.