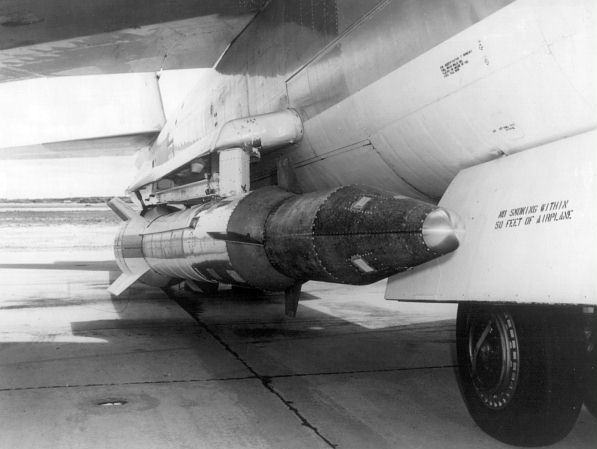 Bold Orion was a research and development program of the Martin Company, Baltimore (later Martin Marietta). In 1958, the company was offered a short-term contract with the U.S. Air Force to determine if air-launched ballistic missiles (ALBM) were feasible. An ALBM would differ dramatically from cruise missiles already under development at the time. Cruise missiles flew toward their targets somewhat like traditional aircraft. An ALBM, however, could be dropped from an aircraft, then fly a ballistic path into space on the way to its target. Although a number of ground-launched ballistic missiles were already being vigorously developed by 1958, Bold Orion represented the first ballistic missile that could be launched from the air. Designated ALBM-199B, the Bold Orion program introduced a series of test missiles which were launched over Atlantic Missile Range waters from B-47 aircraft.

Since the Bold Orion program was highly secret in nature and very short-lived, specific records regarding the vehicles themselves have not survived. However, certain anecdotal accounts have shed some small light on the program. Actual vehicles flown in the course of the Bold Orion program were fashioned by combining elements of existing missile programs, so at first the test vehicles may have differed from one to the next. After several early versions of the Bold Orion did not perform well in flight tests, Martin engineers apparently adapted Sergeant missile components as a first stage and Vanguard rocket third stage components as a second stage. The result was a very effective two-stage, solid-fueled missile that is reported to have flown a maximum distance of 1,100 miles and successfully demonstrated that ALBM weapons were feasible.

According to U.S. Air Force records, a total of 12 Bold Orion missiles were launched from B-47 aircraft over Atlantic Missile Range waters between May 26, 1958 and October 13, 1959. The last of these launches was extremely significant. The Bold Orion launched from a B-47 aircraft flying at an altitude of 35,000 feet on October 13, 1959 was guided on a ballistic path 1,000 miles north, into the area near Wallops Island, Virginia. As this Bold Orion flew, the Explorer VI satellite, traveling at a speed of about 18,000 m.p.h., approached its closest point to Earth at an altitude of 156 miles. The Bold Orion was aimed at a point about ten miles ahead of Explorer VI at approximately the same altitude. Radar systems continuously tracked the missile as it flew. In addition, the Bold Orion transmitted radio signals to ground stations and intermittently released pyrotechnic flares that aided in visual tracking. A combination of these tracking methods determined that the Bold Orion missile passed within four miles of the Explorer VI satellite, a remarkable achievement in its day. Thus, the Bold Orion program was not only the first to demonstrate that ALBM weapons systems were feasible, it also was the first to demonstrate that the interception of satellites by ballistic missile weapons was possible.