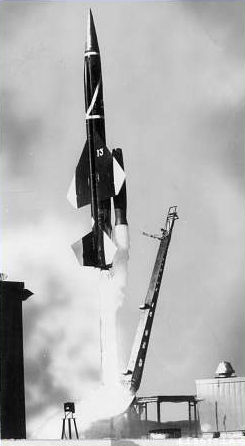 Following initial research and development activities after World War II, the pilotless interceptor aircraft or Surface-to-Air Missile (SAM) was envisioned as an instant readiness supersonic cruise aircraft with a range of several hundred miles. The SAM concept was created primarily to protect the U.S. mainland from enemy aircraft. By 1949, the first SAM designs were presented to the U.S. Air Force for consideration. These included plans for the Bomarc. The Bomarc name was derived directly from its creators. Boeing designed the vehicle in association with the University of Michigan Aeronautical Research Center. Hence, the “BOeing Michigan Aeronautical Research Center” entry into SAM development was born.

Boeing was granted a full contract for Bomarc production in 1951 under the XF-99 designation. The numerical designation would eventually change to IM-99A and CIM-10A. The first production vehicle became known as Bomarc A, while a more advanced version became known as the Bomarc B. Bomarc incorporated a basic airplane configuration with an advanced airframe designed to endure vertical take-off and cruising speed in excess of four times the speed of sound. The wing tips were cropped, and could pivot to act as ailerons. Bomarc also incorporated a fin, the tip of which acted as a rudder. In addition, the tailplanes acted as elevators. The total package made the Bomarc a very reliable cruise missile.

Two body pylons carried underneath the wings each housed a Marquardt ramjet engine capable of producing 10,000 pounds of thrust. At launch, the vehicle was powered by an Aerojet-General motor with a gimbaled chamber. This motor was fueled by acid/JP-4 liquid propellant. A few seconds after launch, the Marquardt ramjets, fueled by 80 octane gasoline, fired and the Bomarc aerodynamic components were activated. Bomarc was the first weapons system to employ an active homing system. Interceptions were controlled by a Semi-Automatic Ground Environment (SAGE) system designed to alert and control the SAM toward its target.

In 1958, Bomarc guidance was improved to include Back-Up Interceptor Control (BUIC), creating a more reliable SAGE/BUIC interceptor combination. The Bomarc was designed to be housed in shelters having a roof that could split right and left down the middle, allowing the missile to be raised prior to a quick launch. While this type of shelter was used initially, the structures proved to be too expensive to construct and maintain. As a result, later Bomarc facilities employed a more simple shelter with a sliding roof. Originally, the Bomarc could be launched within two minutes following a target alert. The launch time was later reduced to just 30 seconds.

The missile could cruise at 65,000 feet as it headed toward its target. About 10 miles from the target, the SAGE or SAGE/BUIC control was cut out, and a Westinghouse radar located in the nose of the Bomarc A guided the vehicle to target impact. The Bomarc could be fitted with a conventional explosive or nuclear weapons payload. A Bomarc missile prototype was first test-flown on September 10, 1952. The operational version was ready for its first test flight by February, 1955. On October 2, 1957, a Bomarc A launched from Cape Canaveral successfully flew to within lethal distance of a drone Navaho X-10 test vehicle flying nearly twice the speed of sound at an altitude of 48,000 feet.

Remarkably, this Bomarc mission employed a SAGE interceptor system controlled from Kingston, New York. Of course, the valuable Navaho X-10 target vehicle was never destroyed during the test and made a successful return flight to Cape Canaveral. Boeing began delivering operational Bomarc missiles to the U.S. Air Force in 1957, with a total of 366 deployed by 1960 at bases which could house one or two 28-missile squadrons. Initially, Bomarc A deployment occurred at Dow Air Force Base, Maine, Otis Air Force Base, Massachusetts, McGuire Air Force Base, New Jersey and Suffolk Air Force Base, New York.