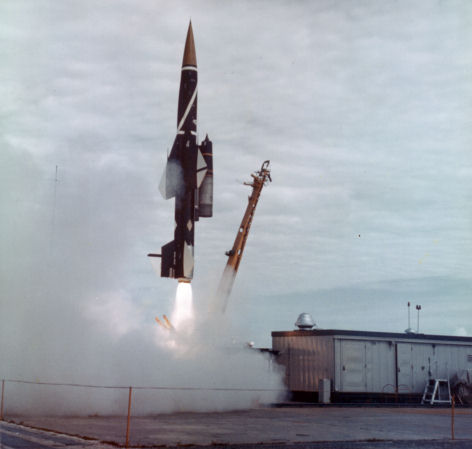 Essentially an improved and streamlined Bomarc A, the Bomarc B, designated IM-99B, was ready for flight testing in 1959. The Bomarc B added a Thiokol solid rocket booster housed under the missile’s body. Capable of producing a thrust of 50,000 pounds, the booster fired for 30 seconds before it was jettisoned. Extra tankage was fashioned within the body of the Bomarc B to house additional JP-4 fuel for two improved Marquardt ramjet engines, each of which had a thrust of 14,000 pounds. This upgraded propulsion system nearly doubled the range of the Bomarc weapons system. The missile also incorporated a more advanced Westinghouse radar system. Boeing delivered a total of 349 Bomarc B missiles to the U.S. Air Force between 1961 and 1965. These either replaced aging Bomarc A missiles at existing bases or facilitated Bomarc B deployment at new sites. New Bomarc B deployments occurred at Kinchloe Air Force Base, Michigan, Duluth Municipal Airport, Minnesota and Niagara Falls Municipal Airport, New York. In addition, the Royal Canadian Air Force accepted Bomarc B missiles for deployment at bases in North Bay, Ontario and LaMacaza, Quebec. The last of the Bomarc squadrons was deactivated in 1972.