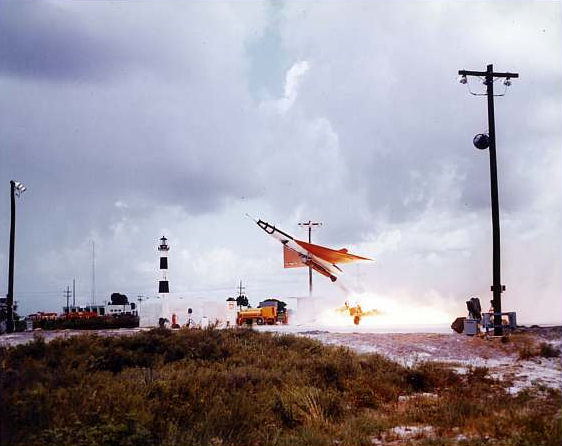 The Goose missile was not a missile in a traditional sense. The vehicle was never designed to carry an offensive weapon. Rather, the Goose would have been used to confuse enemy defensive systems by creating a false electronic target to draw weapons away from manned bombers or actual offensive winged cruise missiles. The vehicle was designed by Fairchild under an initial designation of SM-73. Flight development began in 1957 as XSM-73, a turbojet-powered winged cruise missile. Originally styled as “Blue Goose” and “Bull Goose”, only the latter was actually launched from Cape Canaveral. Developmental flight test models of the Goose never actually carried passive sensors, electronic jammers or relay communications equipment as designed, primarily due to the fact that the program was canceled before these items were incorporated.

Operational Goose vehicles would have been launched from fixed shelters, assisted at launch by a Thiokol solid rocket booster and powered in flight by a turbojet which could produce 2,200 pounds of thrust. While Goose missiles could have been launched from overseas bases for the purpose of flying over the Soviet Union, Goose bases were initially proposed for Duluth Municipal Airport, Minnesota and Ethan Allen Air Force Base, Vermont. Launches from these bases could not possibly have supported Goose flights over the Soviet Union. This fact created a theory that Goose missiles would have been intermittently flown over the U.S. mainland to test the reliability of domestic defensive systems. While this would have demonstrated an interesting flight scenario, the Goose was never deployed for this or any other purpose. The entire program was canceled in December, 1958. A Bull Goose did, however, hold the distinction of being test launched from Cape Canaveral on January 31, 1958. A Juno I rocket carrying America’s first satellite, Explorer I, was launched later the same day from Cape Canaveral Launch Complex 26.