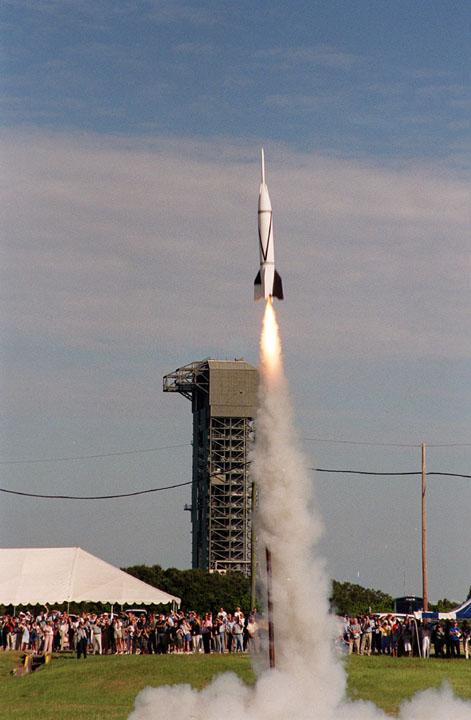 This 1:8.5 scale model of Bumper #8 was built by Michael Myrick to commemorate the 50th anniversary of the launch of Bumper #8 which occurred on July 24, 1950 and was the first rocket launch from Cape Canaveral. The model rocket was launched not far from Launch Pad 3 on July 24, 2000 as part of an anniversary gathering of about 300 people seated on Launch Pad 3, site of the launch of the real Bumper #8. The launch of the model rocket was carried as an official launch by the 45th Space Wing and in fact the Range Safety Officer gave a final “go” for launch. The model rocket employed an Aerotech J3505 rocket motor powered by grain in a Dr. Rocket’s 38/720 reloadable casing. The motor produced a maximum thrust of 134.5 pounds and an average thrust of 78.7 pounds during a burn time of 1.9 seconds. The rocket reached a maximum altitude of about 1,000 feet. The rocket carried a number of postal covers as ballast, which were later canceled with the official Post Office commemorative Bumper #8 50th anniversary postmark. The flight lasted about three minutes. Unfortunately, the recovery parachutes malfunctioned and the rocket was damaged when it hit the ground.