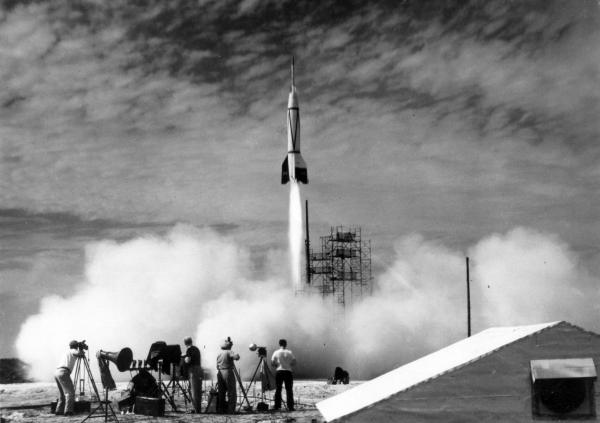 Although flown just twice from Cape Canaveral, the Bumper-Wac will always deserve a prominent place in history because of its location in the Cape’s launch chronology. Indeed, the last two Bumper-Wac missiles ever flown represented the first and second launches from Cape Canaveral’s fledgling missile testing grounds. A marriage of the German V-2 ballistic missile and the U.S. Army Wac Corporal research rocket, the Bumper-Wac design can be traced back to the creation of the Wac Corporal in 1944. At that time, the Wac Corporal was designed and built in a cooperative effort between Douglas Aircraft and the Guggenheim Aeronautical Laboratory, in association with the Jet Propulsion Laboratory at California Institute of Technology. The cooperative group designed and built a 5-foot long solid-fueled booster called “Tiny Tim” which could produce an impressive thrust of 50,000 pounds. “Tiny Tim” was attached to the bottom section of a 20-foot liquid-fueled sustainer engine stage, with the total vehicle capable of reaching a speed of nearly 3,000 m.p.h. on ascent. This two-stage combination comprised the Wac Corporal research rocket.

The actual Bumper-Wac configuration was designed in support of “Project Hermes”, an Army research effort conducted between 1948 and 1952. A vehicle was needed to facilitate the study of technical problems associated with rocket stage separation, high altitude flight dynamics and high altitude rocket stage ignition. A total of eight captured German V-2 ballistic missiles were adapted for the tests. The Wac Corporal’s liquid-fueled stage was simply mounted on the nose of the V-2 to create the Bumper-Wac. The Wac Corporal’s “Tiny Tim” solid-fueled stage was not employed in the Bumper-Wac combination. The liquid-fueled stage alone, as adapted for the vehicle, was 15 feet long and 1 foot wide and could produce a thrust of 150 pounds. The V-2 stage was 45 feet long and 5 feet, 5 inches wide with a total finspan of 12 feet. It could produce a thrust of 55,000 pounds at liftoff. The Wac Corporal second stage remained atop the nose of the V-2 for the first minute of flight. The V-2 then shut down, after providing a high altitude “bump” for the Wac Corporal second stage. This is why the V-2 first stage was given the name “Bumper”.

Following the first stage shutdown, the Wac Corporal second stage ignited and fired for 45 seconds, completing the remainder of the flight. The first six Bumper-Wac rockets were launched from the White Sands Missile Range in New Mexico. The first of these was launched on May 13, 1948. The vehicle flew to an altitude of 80 miles at a maximum speed of 2,740 m.p.h. Five more test flights were conducted at White Sands with mixed results. Bumper #5, launched on February 24, 1949 was the most successful in the White Sands Bumper-Wac series. In this test, the vehicle achieved an altitude of 244 miles at a maximum speed of 5,150 m.p.h. This marked the first time a man-made object reached space. In 1950, Bumper-Wac tests moved to Cape Canaveral. Bumper #7 was scheduled to be launched first, but its initial launch attempt on July 19, 1950 was halted due to a failure of the first stage to achieve proper liftoff thrust. The failure was traced to a stuck fuel valve which had become corroded by salt air and moisture. Thus, perhaps prophetically, the very first launch attempt from Cape Canaveral resulted in a “scrub”. The launch of Bumper #7 was rescheduled to follow Bumper #8, the last rocket in the test series. Bumper #8 was launched on July 24, 1950 from virgin Launch Pad 3. This was the first launch from Cape Canaveral. Bumper #7 eventually flew on July 29, 1950 in the second launch from the Cape. 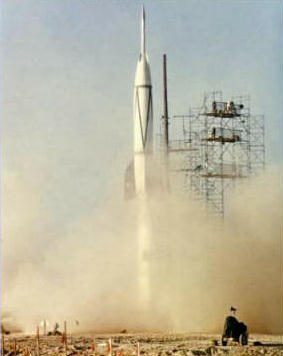