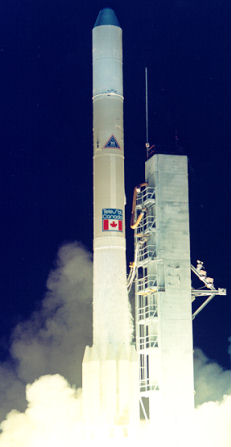 Although Delta 900 Series rockets were never launched from Cape Canaveral, the introduction of the vehicle marked an important step in the evolution of the Delta program, and a vital link to the Delta rockets which followed. The Delta 900 Series launch vehicle added three Castor II solid rocket boosters to a cluster of six already employed for a total of nine. The rocket also introduced improved guidance and electronics. The second stage featured an improved Aerojet-General engine which burned Aerozine 50/nitrogen tetroxide liquid fuel, providing a thrust of 9,800 pounds. Six of the nine solid rocket boosters were ignited at liftoff. These burned out and were jettisoned as the remaining three were ignited and burned for an additional 39 seconds. The nine solid rocket boosters contributed a total of 480,600 pounds of thrust to the overall vehicle. The two-stage Delta 900 Series rocket, designated Delta 900, could carry a 3,700-pound payload to low-Earth orbit. The three-stage version, designated Delta 904, could carry a 1,400-pound payload to geostationary transfer orbit.