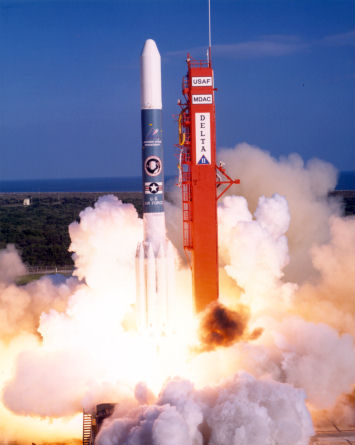 The Delta 3000 Series was born out of the need for a rocket capable of carrying payloads too heavy for the Delta 2000 Series but not heavy enough to require the use of an Atlas-Centaur. Since NASA did not envision a need for a new medium-weight launch vehicle so close to the introduction of their Space Shuttle, the space agency was reluctant to provide financing for this next generation Delta rocket. However, NASA was able to provide a blessing for the vehicle, if not backed by up-front money. NASA did envision a use for the Delta 3000 Series as an interim launch vehicle to handle medium-weight payloads prior to operational flights of the Space Shuttle, which at the time were nearly a decade away. As a result, McDonnell Douglas was able to secure private industrial financing for the introduction of the Delta 3000 Series. NASA provided no research and development funding, but did purchase the completed vehicles in support of civilian and commercial satellite launches.