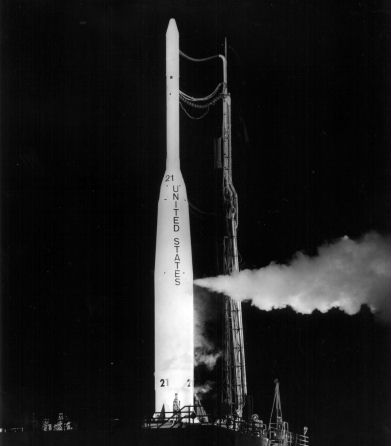 In most respects, the Delta B was very similar to the Delta A which preceded it, but featured an improved second stage. The second stage propellant tanks were lengthened 35.8 inches to increase the amount of fuel they could carry. An upgraded Aerojet-General second stage engine, coupled with this additional fuel capacity, facilitated the launch of heavier payloads. The Delta B also incorporated an improved guidance and electronics system. The vehicle was capable of carrying an 825-pound payload to low-Earth orbit, or a 150-pound payload to geostationary transfer orbit. It was a Delta B rocket that supported the deployment of the world’s first geosynchronous satellite. SYNCOM-1, launched aboard a Delta B on February 14, 1963, achieved a near-synchronous orbit. This was followed by the launch of SYNCOM-2 aboard a Delta B on July 26, 1963. SYNCOM-2 was the first satellite to achieve geosynchronous orbit.