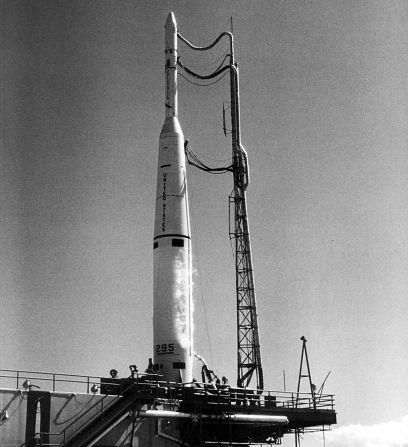 Evolving directly from the U.S. Air Force Thor IRBM, the Delta space launch vehicle was designed for NASA in 1959 to handle a variety of satellite payload applications. Manufactured by Douglas Aircraft, which became McDonnell Douglas, the Delta family gave NASA a firm, reliable foundation for launching intermediate-weight civilian payloads. Although originally considered a temporary, interim vehicle to meet NASA requirements of that era, the Delta launch vehicle continued to evolve to meet the ever-increasing demands of the civilian and commercial satellite industry, and remains in use today. The non-military nature of the original Delta vehicle is historically significant, since it was the reason the booster family was given the name it still holds. The military Thor IRBM had already been adapted for satellite launches prior to the introduction of the Delta vehicle.

The first three Thor-based satellite launchers were called Thor-Able, Thor-Able-Star and Thor-Agena A, based on the respective names of the rocket’s upper stage configurations. The intended name Thor-Delta represented the fourth upper stage configuration for the Thor-based space launch vehicle, because Delta is the fourth letter of the Greek alphabet. Since the vehicle was designed primarily to be a civilian satellite launcher, the name Thor was eliminated so that the rocket could be better distinguished from its military relatives. The same basic principle was applied in the late 1950’s as the short-lived Redstone MRBM-based and Jupiter IRBM-based rockets were renamed Juno I and Juno II, respectively, for civilian satellite launching applications. But as far as modern missile-descended rocket families are concerned, the Delta is unique in this regard. The Atlas and Titan rocket families never dropped the names of their military ancestors.

While rockets carrying the Thor name continued to launch military satellites from Vandenberg Air Force Base, California well into the 1970’s, the Delta family has served with distinction as one of the longest-lived programs on the Cape. Introduced in 1960, the original Delta was a three-stage launch vehicle made up of a Thor IRBM mated to improved Vanguard rocket upper stages. The first stage employed a Rocketdyne engine which burned liquid oxygen/RP-1 (kerosene) liquid fuel and produced a thrust of 150,000 pounds. An Aerojet-General second stage engine burned IRFNA/UDMH liquid fuel and provided 7,800 pounds of thrust. The solid-fueled Able third stage motor, adapted from the Vanguard rocket, produced a thrust of 2,800 pounds. Radio guidance equipment was carried aboard the first and second stages. The third stage was spin-stabilized at 140 r.p.m.

The vehicle could carry a 600-pound payload to low-Earth orbit. It was also designed to carry a 100-pound payload to geostationary transfer orbit, although the first version of the Delta was never used for that purpose. In a typical flight profile, the first stage was fired at liftoff and burned for about two minutes. After first stage separation at an altitude of nearly 41 miles, the second stage was ignited and burned for about three minutes. While the second stage burned out as the vehicle coasted to an altitude of about 161.5 miles, the third stage began spinning up to the proper number of revolutions. Following jettison of the second stage, the third stage was fired for nearly one minute to achieve its necessary orbital velocity.