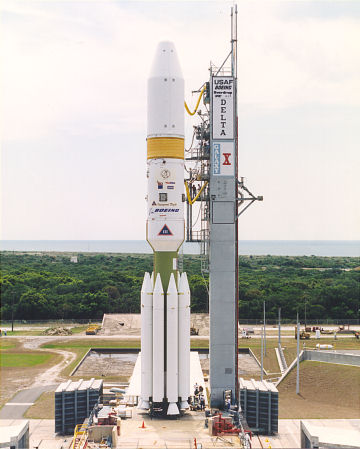 Building directly upon the Delta II 7000 Series of rockets, the Delta III dramatically improved payload capability by introducing larger, more powerful solid rocket boosters and a completely new upper stage configuration. The Delta III employed the same first stage engine and liquid oxygen tank as the Delta II 7000 series, and shared a number of common technical components which served to trim the development cost of the rocket considerably. Much about the Delta III, however, was brand new with the introduction of the rocket. This included new Alliant Techsystems solid rocket boosters, sharing the Graphite Epoxy Motors (GEM) name with the solid rocket boosters used in the Delta II 7000 Series. The Delta III was designed to use nine GEM’s in all flight applications. The Delta III GEM’s were much larger and more powerful than previous versions. Each GEM measured 65 feet, 8 inches long and had a diameter of 3 feet, 10 inches. Each GEM burned HTPB solid fuel. Six of the GEM’s were ignited at launch, or were “ground-lit”. Three of the GEM’s were ignited in flight, or were “air-lit”. The ground-lit GEM’s could each produce a thrust of about 136,700 pounds while the air-lit GEM’s could each produce a thrust of about 141,300 pounds. Three of the ground-lit GEM’s employed steerable exhaust nozzles, or thrust vector control, which aided in guiding the Delta III during flight.

Delta III first stage performance was identical to that of the Delta II 7000 Series, but a completely new second stage was employed. A Pratt and Whitney second stage engine, based on the tried and true Pratt and Whitney Centaur upper stage, burned a combination of liquid oxygen and liquid hydrogen and could produce a thrust of about 24,750 pounds. Previous Delta second stages have burned highly toxic liquid fuels, and the introduction of a second stage that burns liquid oxygen and liquid hydrogen made Delta III launch processing much more safe and cost-effective. The Delta III was not introduced with a third stage, but could employ a Thiokol solid-fueled third stage similar to that used on Delta II 7000 Series three-stage rockets if necessary. The standard payload fairing employed on the Delta III had a diameter of 13 feet, 1 inch. In order to support this payload fairing, the Delta III body tapered to a diameter of 13 feet, 1 inch above the first stage liquid oxygen tank. The Delta III was able to carry a maximum 18,280-pound payload to low-Earth orbit, a maximum 8,400-pound payload to geostationary transfer orbit or a maximum 6,000-pound payload to Earth-escape trajectory. The performance figure of a maximum 8,400-payload to geostationary transfer orbit, the application required for most commercial communications satellites, represented a remarkable two-fold increase over the performance of the Delta II 7000 series. Despite these improvements, the Delta III suffered two major failures and was retired after just three launches.