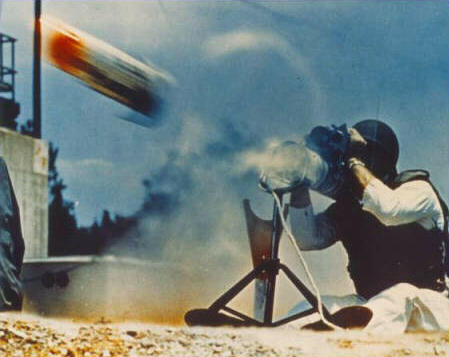 Certainly one of the smallest missiles ever tested at Cape Canaveral, Dragon represented an effort of the U.S. Army to develop an anti-tank weapon capable of replacing the 90 millimeter recoilless rifle. Development of Dragon by McDonnell Douglas began in 1966. The missile was later manufactured at the McDonnell Douglas plant in Titusville, Florida. The close proximity of Titusville to Cape Canaveral likely explains why a weapon of this type was tested there. The Dragon weapons system was declared operational in 1973 under the general designation FGM-77A and U.S. Army ordnance designation M-47. The missile was fired from a hand-held tube launcher resembling a bazooka. The missile was thrust from its tube launcher by an ignited solid charge, which was itself thrust out a rear port in the tube launcher to prevent violent recoil. Dragon was then sent toward its target by the firing of 30 pairs of small thrusters positioned around the side of the missile body.

During flight, the missile was stabilized by three fins that unfolded after they cleared the tube launcher. The soldier launching the missile would simply keep his optical sights trained on the target, and the missile would automatically fire the proper pairs of thrusters to center itself on the target. Guidance information was correlated through the use of an infra-red tracker, which constantly updated the position of the missile in relation to the target and the launcher. Data received from the infra-red tracker supported split-second adjustments to the firing of the thrusters. Each pair of thrusters could produce a thrust of 265 pounds, allowing the missile to reach a maximum speed of about 560 m.p.h. A warhead located at the tip of the missile was capable of penetrating up to two feet into its target. The U.S. Army ultimately purchased about 250,000 Dragon missiles, which were also purchased in smaller numbers by the U.S. Marine Corps and the armies of Denmark, Iran, Israel, Jordan, Morocco, Holland, Saudi Arabia and Switzerland.