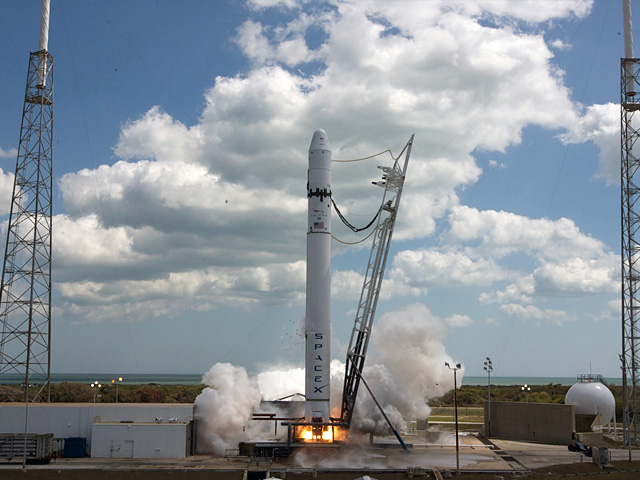 Falcon 9 is a two-stage, liquid oxygen and RP-1 (kerosene) powered rocket manufactured by Space Exploration Technologies Corporation (SpaceX). The Falcon 9 first stage is powered by nine Merlin engines, each capable of producing an initial thrust of 125,000 pounds. This combination provided a total liftoff thrust of about 1.1 million pounds. The Falcon 9 second stage is powered by a single Merlin engine, capable of producing an initial thrust of 125,000 pounds. The Falcon 9 as introduced was capable of carrying a 23,050-pound payload to Low-Earth Orbit, or a 10,000-pound payload to Geosynchronous Transfer Orbit. Of particular importance to NASA is the SpaceX-designed and built Dragon and Crew Dragon space capsules, which are intended to carry supplies and astronauts to the International Space Station. 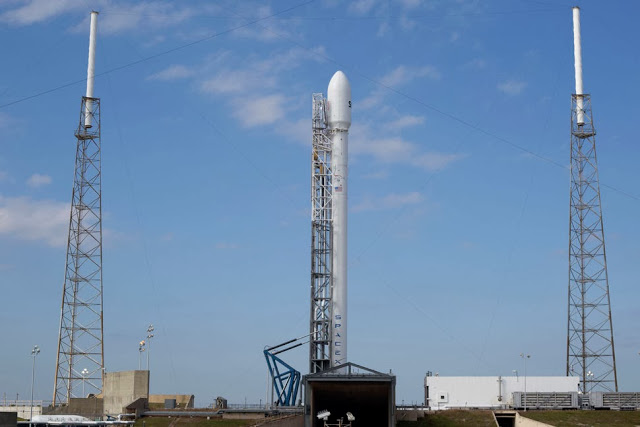 In 2013, SpaceX introduced an improved version of the Falcon 9 designated Falcon 9 Version 1.1 which vastly improved performance over the Falcon 9 as initially introduced. Among other improvements, Falcon 9 Version 1.1 featured improved Merlin engines, stretched fuel tanks and the ability to carry either a Dragon or Crew Dragon capsule or composite payload fairing. The Falcon 9 Version 1.1 first stage burned liquid oxygen and RP-1 liquid fuel and was comprised of nine Merlin engines. Total thrust at liftoff is approximately 1.323 million pounds. The first stage burned for about 180 seconds after launch. The entire first stage array was designed to be recovered on a barge at sea or on land, refurbished and re-flown. The Falcon 9 Version 1.1 second stage was comprised of a single Merlin engine capable of producing a thrust of 180,000 pounds. The second stage burned for about 375 seconds after ignition and could be restarted multiple times as needed. The pressurized Dragon capsule measures 23.6 feet high by 12 feet wide and is designed to carry cargo and astronauts to the International Space Station. The composite payload fairing measures 43 feet high by 17.1 feet wide. The rocket could carry a maximum 28,991-pound payload to Low-Earth Orbit or a maximum 10,692-pound payload to Geosynchronous Transfer Orbit. 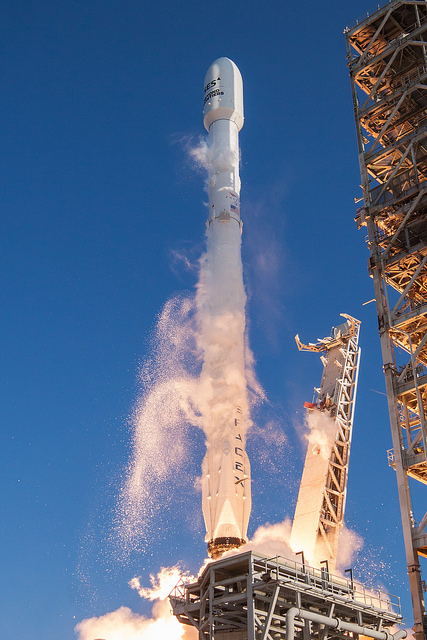 The Falcon 9 Full Thrust Version (Block 5) is currently in use. The vehicle employs liquid oxygen that is super cold, nearly at its freezing point. The use of this denser fuel coupled with an extended fuel tank allows more fuel to be loaded into the rocket, increasing liftoff thrust and burn time. First stage thrust is increased to 1.71 million pounds at liftoff. Second stage thrust is 210,000 pounds. The rocket is designed to fly up to ten times without refurbishing and up to 100 times with periodic refurbishing. The vehicle is capable of carrying a 50,265-pound payload to Low-Earth Orbit, an 18,300-pound payload to Geosynchronous Transfer Orbit or an 8,860-pound payload on a Mars trajectory. The Falcon 9 program to date has achieved several milestones, including landing a first stage booster on a barge at sea and on land, as well as successfully re-flying a flown orbital class booster.