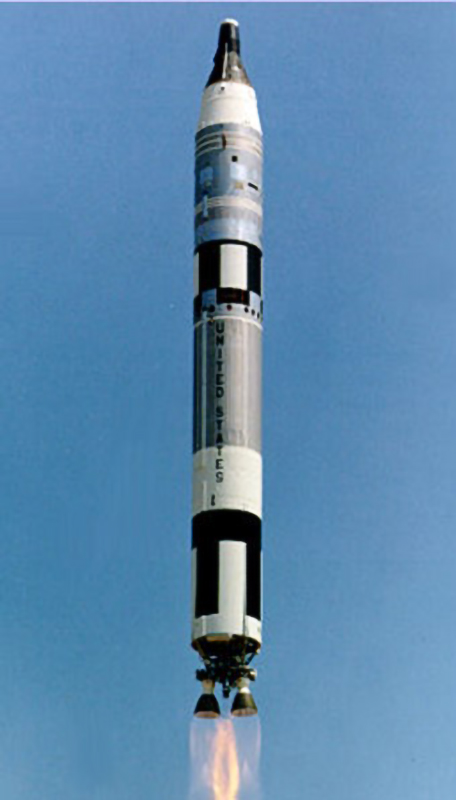 Nearly identical in performance characteristics to the Titan II ICBM, the Gemini-Titan II incorporated a number of safety modifications prior to being used as a core booster for the NASA Gemini manned space flight program. In the Gemini-Titan II first stage LR87-AJ7 engine burned Aerozine 50/Nitrogen Tetroxide liquid fuel and could produce a liftoff thrust of 430,000 pounds. The LR91-AJ7 second stage engine also burned Aerozine 50/Nitrogen Tetroxide liquid fuel and could produce a thrust of 100,000 pounds. Safety modifications included the incorporation of a Gemini Malfunction Detection System to inform the crew of the rocket’s status and improve response time in an emergency. Redundant systems were built in to reduce the chances of an in-flight malfunction. The inertial guidance system was replaced with a lighter weight radio ground guidance system. The avionics truss in the second stage was slightly modified.

In addition, the second stage propellant tanks were lengthened to provide additional burn time. Unnecessary vernier engines and retro-rockets were removed. The first stage was loaded with 13,000 pounds of fuel more than that of the Titan II ICBM, even though the tank size remained unchanged. Modifications were made to the tracking, electrical and hydraulics systems to improve reliability. The propellants were chilled slightly to improve performance. First stage engine thrust was reduced slightly to cut down on vibration and gravity loads. The first stage was designed to cut off at fuel depletion, as opposed to the Titan II ICBM whose first stage cut off before fuel was depleted. Overall vehicle performance was sufficient to support the entire Gemini program, although there were a number of problems with the rocket that cropped up and needed to be troubleshooted as the program continued.