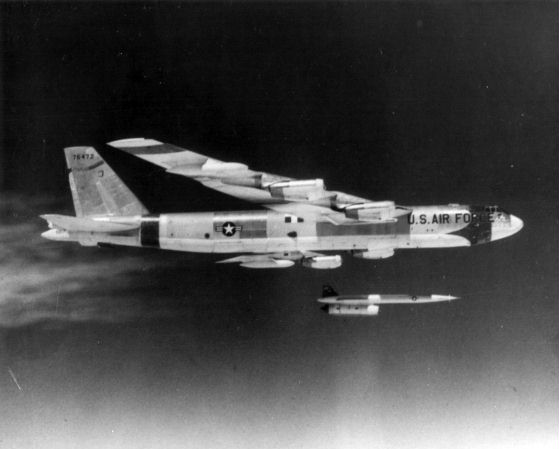 The Hound Dog missile was developed by North American Aviation, later Rockwell International, beginning in 1957. A bomber-launched air-to-surface winged cruise missile, the Hound Dog was designed to help U.S. manned bombers penetrate enemy airspace. The vehicle also served to fill a cruise missile gap which existed following the cancellation of the Navaho program. Indeed, the Hound Dog’s configuration was adapted directly from the Navaho X-10 test vehicle, which was also built by North American Aviation. Initially designated AGM-77, the Hound Dog featured small canard foreplanes, rear delta wings with ailerons, plus a small fin and rudder. The vehicle was powered by a Pratt and Whitney turbojet which could produce a thrust of 7,500 pounds. The engine was located in an underslung rear pod. It featured variable inlet and nozzle systems which could adjust the speed and altitude of the missile.

This allowed the Hound Dog to cruise at altitudes which ranged from tree-top level to 55,000 feet. Guided by a North American Autonetics Division inertial guidance system which was eventually upgraded to incorporate a Kollsman Star Tracker, the Hound Dog could carry a one-megaton nuclear payload. The Hound Dog was declared operational at Eglin Air Force Base, Florida in early 1961 for use on the B-52G bomber. When Hound Dog production ceased in 1963, the U.S. Air Force had 593 of the missiles in their inventory. The deployed Hound Dog missiles were designated AGM-28A, with a slightly improved version designated AGM-28B. For a time, all U.S. Air Force B-52G and B-52H bombers were equipped with one Hound Dog pylon under each wing. The Hound Dog actually transformed these bombers from eight-engine to ten-engine aircraft at takeoff. One Hound Dog missile located under each wing was actually ignited at takeoff, providing extra thrust for the bomber itself. The Hound Dog engines were then shut down, and the missiles were re-fueled directly from the B-52’s own tanks during flight. Once re-fueled, the missiles were ready to be fired again and sent on their way, after the proper guidance and target information could be entered and verified. Filling a vital role in providing a diverse pattern of offensive capabilities for the U.S. Air Force, the Hound Dog was not completely removed from active service until 1976.