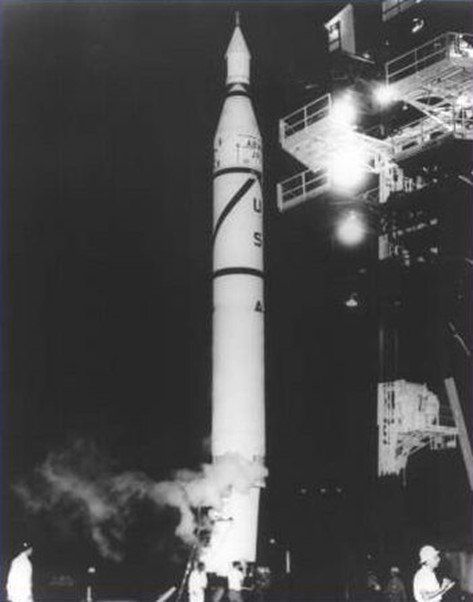 Adapted from the Redstone MRBM as a follow-up to the Jupiter A, the Jupiter C rocket was developed as a test vehicle to evaluate Jupiter IRBM nosecone technology, including various shapes, sizes and materials. In 1955, a rocket nearly identical to Jupiter C was detailed in Project Orbiter, a joint Army/Office of Naval Research plan for launching satellites during the International Geophysical Year. When Project Orbiter was rejected in favor of Project Vanguard, the multi-stage Redstone concept could well have died. Project Orbiter was officially rejected on September 9, 1955. However, on September 13, 1955 Secretary of Defense Charles E. Wilson authorized the Army and the Navy to cooperate in the development of the Jupiter IRBM. Just days after the cancellation of Project Orbiter, a multi-stage Redstone was given a new lease on life.

Engineers at the Ordnance Guided Missile Center at the Redstone Arsenal were quickly given authority to develop the Jupiter C to facilitate high-altitude re-entry tests of Jupiter missile components. The work was assumed by the Army Ballistic Missile Agency (ABMA) upon its creation on February 1, 1956. Like the Jupiter A, the Jupiter C could have been correctly called a Redstone, but the name was changed to Jupiter C, or “Jupiter Composite”, short for “Jupiter Composite Re-entry Test Vehicle.” Again, a name tying the vehicle directly to the Jupiter IRBM development program assured the Army very high priority when scheduling launch dates at Cape Canaveral. The Jupiter C rocket was quite similar to the Juno I as previously described. There were, however, several important differences. The Jupiter C was designed specifically to carry a nosecone into space and allow it to complete a high-speed re-entry.

Both Juno I and Jupiter C employed a Redstone missile as first stage booster, using Redstone tankage extended a total of 96 inches to hold more fuel. However, the Jupiter C Redstone booster burned liquid oxygen and alcohol, like the production version of the Redstone MRBM. The satellite-bearing Juno I Redstone first stage engine was modified to burn higher energy Hydyne liquid fuel instead of alcohol. Both the Jupiter C and Juno I employed 11 clustered Thiokol Baby Sergeant solid rocket motors as second stage, and three clustered Thiokol Baby Sergeant solid rocket motors as third stage. Like the Juno I, the Jupiter C clustered second and third stages were housed inside a distinctive rotating “tub”, spin-stabilized at several hundred revolutions per minute (actual spin rate depended on the weight of the payload) during ascent. This rotating motion was designed to stabilize the upper stages during flight. However, since the Jupiter C was not intended to carry satellites into space, it never employed an operational fourth stage motor. Hence, it was a three-stage version of the Redstone, while Juno I was a four-stage version of the Redstone.

The Jupiter C first stage, with a liftoff thrust of 78,000 pounds, burned for 150 seconds after launch, boosting the upper stages to near-space. After first stage cutoff and separation, the clustered upper stages were able to continue an unpowered ballistic flight until reaching the highest altitude momentum would allow. The second stage was then fired for six seconds, moving quickly away from the rotating “tub” assembly. After second stage cutoff and a two second pause to allow safe stage separation, the third stage was fired for six seconds. It then separated from the payload, which continued a ballistic path toward ultimate ocean impact. Intense heat was created during re-entry, allowing valuable scientific data on flight dynamics and nosecone performance to be gathered. This aided in the selection and development of the actual nose cones which would be carried aboard operational Jupiter missiles.

From the outset of the Jupiter C program, ABMA made a practice of painting large black letters on the mostly white rocket. These were intended to preserve secrecy about the total number of Redstone boosters being produced.

A numerical value was given to letters in the name Huntsville, where ABMA was based. The numerical code was:

Since the first Jupiter C rocket employed Redstone booster #27, this rocket was painted with a large “UI” as per this established code. The first Jupiter C was launched from Cape Canaveral Launch Pad 5 on September 20, 1956. It performed far beyond expectations. This Jupiter C was the only one to carry an inert fourth stage motor ballasted with sand lest ABMA “accidentally” launch a satellite before Project Vanguard. The inert fourth stage motor reached a maximum altitude of 682 miles and distance of 3,350 miles, establishing Cape Canaveral records for both altitude and distance. This was both a blessing and a curse for ABMA, which had effectively demonstrated that the Jupiter C possessed the performance necessary to carry a small satellite into space. However, ABMA remained strictly forbidden to launch a satellite, and would have to impatiently wait almost 16 months for an historic opportunity to do so.

The next Jupiter C, bearing the letters “NT” (Redstone #34) was launched from Cape Canaveral Launch Pad 6 on May 15, 1957. It carried a one-third scale Jupiter “ablative-type” nosecone instead of an inert fourth stage motor. Although it was intended to be recovered at sea, the nosecone was lost. Due to a guidance programming error, the upper stages fired in the wrong direction. The third stage also failed to separate from the payload. Nevertheless, performance of this Jupiter C was impressive. The payload, even attached to the third stage, reached a maximum altitude of 354 miles, eventually impacting the ocean 689 miles downrange. The nose cone could not be recovered due to an impact 365 miles short of the target area coupled with recovery system failure.

The third and last Jupiter C, bearing the letters “TX” (Redstone #40) was launched from Cape Canaveral Launch Pad 6 on August 8, 1957. This Jupiter C also carried a one-third scale Jupiter “ablative-type” nose cone, and marked an important “first” for rocketry. Even though the third stage initially failed to separate from the payload, it did break free during the harsh conditions of re-entry. The nose cone achieved a maximum altitude of 300 miles and impacted the ocean 1,160 miles downrange. The nose cone was successfully recovered, marking the first time an object was recovered after flying in space. The nose cone was found to be in excellent condition, proving that “ablative-type” nose cones were suitable for deployment aboard Jupiter missiles.

Much to the surprise of ABMA commander Major General J.B. Medaris, the nose cone contained a “rocketmail” letter to him from Dr. Kurt Debus, director of the ABMA Missile Firing Laboratory at Cape Canaveral. Medaris accepted the letter and later loaned it to the Smithsonian Institution. But, due to subsequent clandestine efforts of Cape workers to enclose all manner of “rocketmail” in recoverable nose cones, “rocketmail” was banned with threat of severe punishment. Although a total of 12 Jupiter C rockets had been authorized for construction, Jupiter C research flights were concluded after just three launches. Subsequent wise directives by Medaris would prove vital to a U.S. presence in space.

On August 21, 1957 Medaris canceled the Jupiter C research program and ordered that all remaining Jupiter C booster hardware be placed in protective storage. The move was clearly aimed at storing hardware that could be called upon at a future date to launch satellites. Medaris was even able to consign and hold the necessary upper stage hardware as part of a “long-term life test” reportedly intended to determine the useful life of the upper stage solid fuel motors. The specific intent of Medaris was to keep the Jupiter C components in the most advanced state of readiness available to attempt the first launching of a satellite not more than four months from the date authorization was given, followed by additional satellite launchings spaced about one month apart thereafter.

The Army, with Jupiter C performance data in hand, continued to request permission to attempt the launching of instrumented satellites to augment International Geophysical Year scientific research. These requests were consistently denied. The Soviet launch of Sputnik I, the world’s first artificial satellite, coupled with persistent problems in Project Vanguard would have a profound effect on the future of the Jupiter C rocket and U.S. satellite efforts. Purely by chance, ABMA officials were entertaining Secretary of Defense Neil McElroy at the Redstone Arsenal on October 4, 1957, the day Sputnik I was launched. An impromptu effort was immediately made to convince McElroy that ABMA deserved a chance to launch satellites. Secret directives by Medaris would follow soon afterward, as Wernher von Braun, Technical Director of ABMA, was instructed to begin preparing Jupiter C hardware for the launching of satellites. Discussions were also initiated with the Army-sponsored Jet Propulsion Laboratory to evaluate the specific design of satellites.

Secretary of Defense McElroy did convince President Eisenhower that ABMA deserved consideration to launch satellites, but it would be almost two months after the launch of Sputnik I before ABMA was granted official authorization to schedule and stick with satellite launch dates. Prior overtures made to ABMA regarding the launching of satellites had hinged on the outcome of Project Vanguard attempts, with no guarantees that ABMA satellite programs would not be canceled abruptly if Project Vanguard scored an early success. This issue was resolved by late November, 1957 and ABMA was given a firm order to proceed. As it turned out, Project Vanguard would play into the hands of ABMA in a big way. The first Project Vanguard attempt to launch a small, grapefruit-sized tracking satellite met with failure. Vanguard rocket TV-3 exploded on Cape Canaveral Launch Pad 18A on December 6, 1957.

As fate would have it, ABMA would now get the first crack at launching the first U.S. satellite. The first ABMA satellite launch attempt had been scheduled for January 29, 1958. This was originally slated to be five days after the second Project Vanguard satellite launch attempt. However, delays associated with Project Vanguard caused their target launch date to slip to early February, 1958. If ABMA could prepare their launch vehicle and satellite payload as planned, they would get the opportunity they had long coveted. Jupiter C processing was going smoothly due to the earlier directives by Medaris, but a major change was in store for the rocket. On November 18, 1957 Dr. William Pickering, head of the Jet Propulsion Laboratory, suggested to Medaris that the satellite-bearing version of the Jupiter C be renamed Juno.

The recommendation was accepted by ABMA, and the Juno family of rockets was born. Indeed, a Juno I rocket bearing the letters “UE” (Redstone #29) would successfully launch the first U.S. satellite, Explorer I, at 10:48 p.m. EST on January 31, 1958. It should be noted that although the Jupiter C rocket had been renamed Juno I prior to the launch of Explorer I, many books and documents, especially those published just after the historic launch, refer to the Explorer I launch vehicle as a Jupiter C. Purists may continue to argue merits for the use of either name, but the plain fact is that both Jupiter C and Juno I were actually multi-stage Redstones.