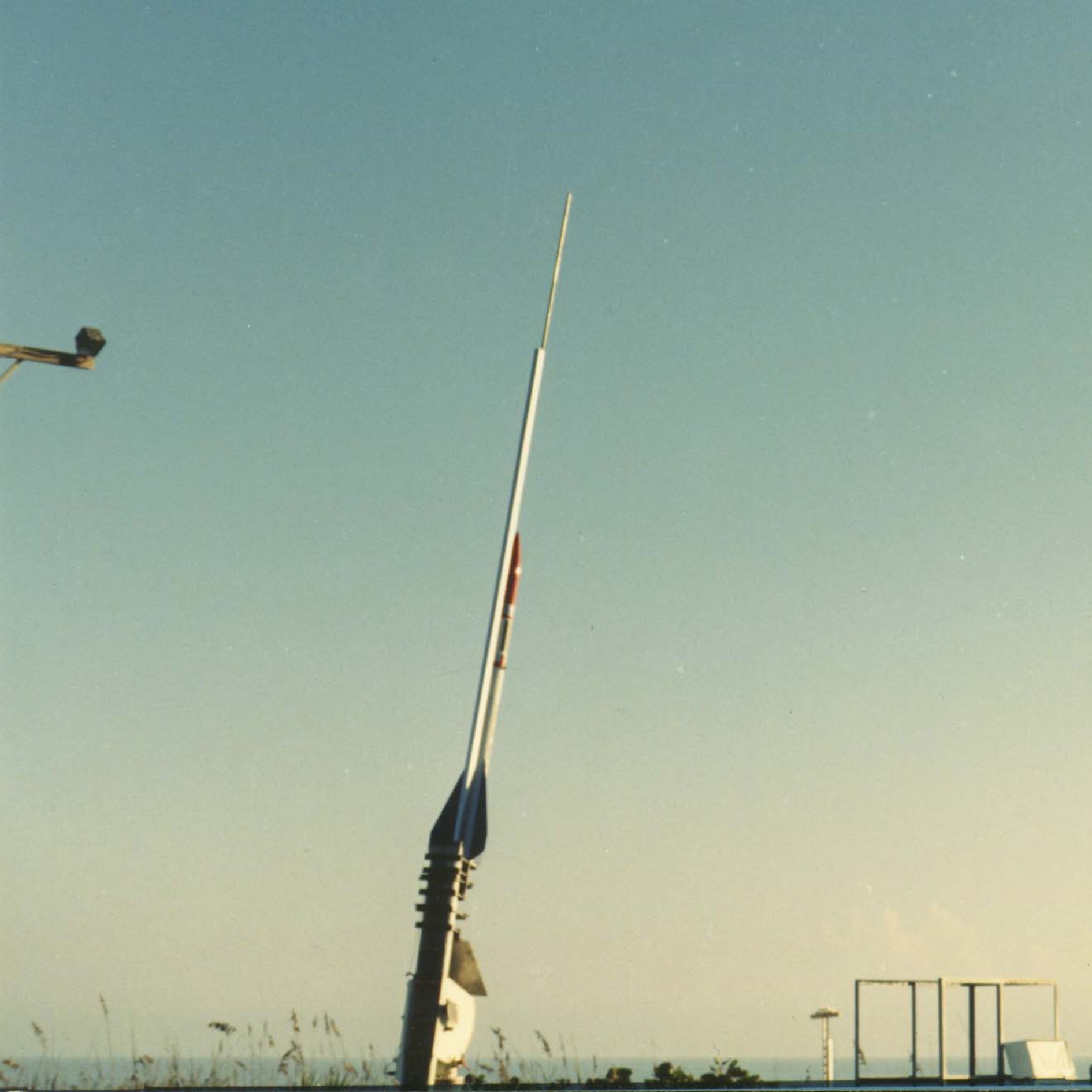 Described as a “little rocket with a big mission”, LOFT-1 was built by E-Prime Aerospace Corporation of Titusville, Florida. Although it was technically a sounding rocket, which are not typically included in official Cape Canaveral launch chronologies, the launch of LOFT-1 was one of the most significant, if smallest, launches in the history of the Cape. Entrepreneurs at E-Prime Aerospace Corporation had envisioned a number of rockets with payload capabilities ranging from 675 pounds to 20,300 pounds which could be introduced as early as late 1990. The company’s decision to develop these rockets was precipitated by a far-reaching post-Challenger tragedy decision by NASA to stop launching commercial payloads. The decision by NASA opened up a virgin U.S. commercial launch industry, and E-Prime Aerospace Corporation sought an early jump on its competitors at exploiting the Cape Canaveral infrastructure for commercial purposes. In order to determine how difficult planning and executing a commercial launch at the Cape would be, the company built its LOFT-1 rocket, standing for Launch Operations Flight Test-1.

Launch of LOFT-1 was targeted for October, 1987 but a mountain of paperwork caused the launch to be postponed until November 17, 1988. Even so, LOFT-1 earned the distinction of being the first fully commercial launch in the history of Cape Canaveral, managing to beat the firmly-rooted Atlas, Delta and Titan rocket families at this task. The LOFT-1 motor and airframe were built by Vulcan Systems of Colorado Springs, Colorado. The rocket was divided into three sections – a solid-fueled rocket motor at the bottom, a parachute section in the middle and a payload section at the top. The solid-fueled rocket motor was capable of producing a liftoff thrust of 15,602 pounds. Following launch, the solid-fueled rocket motor burned for just 4.4 seconds, capable of boosting the rocket to a speed of about 1,400 feet-per-second.

The rocket maintained an unpowered coast for another 25 seconds until reaching its highest altitude of about 14,500 feet. The rocket then began falling toward the Atlantic Ocean, with the solid-fueled rocket motor separating from the rocket at an altitude of about 14,000 feet. A one-foot diameter drogue parachute opened at an altitude of about 10,000 feet, followed by a larger main parachute at an altitude of about 4,000 feet. Splashdown was intended to occur about two miles downrange of the launch site, where recovery operations would begin. LOFT-1 carried four scientific experiments representing three universities and two high schools. Although the parachute system failed to operate properly and the payload section was damaged upon water impact, the experiments were successfully recovered. Although E-Prime Aerospace Corporation had surprised many by its ability to beat established rocket manufacturers in conducting the first commercial rocket launch from Cape Canaveral, the company itself never got off the ground. Unfortunately, LOFT-1 represented the company’s first and final launch.