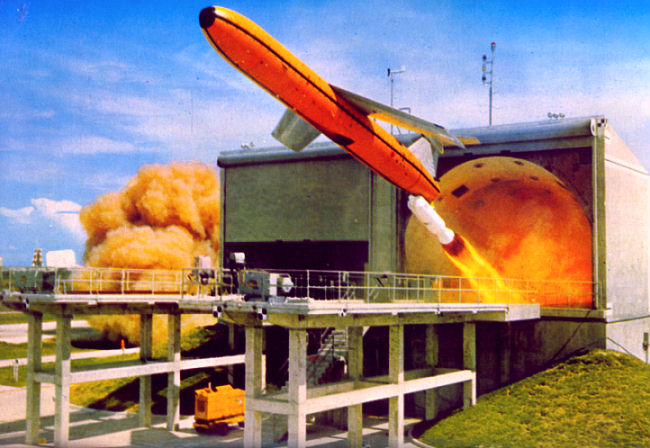 The Mace was a streamlined, more advanced version of the Matador winged cruise missile. Originally designated TM-76, the Mace was designed and built by the Martin Company (later Martin Marietta). Development of the missile began in 1954. The missile was powered by a turbojet engine which could produce 5,500 pounds of thrust. At launch, boost was provided by a solid-fueled motor attached under the vehicle’s tail. The solid rocket booster could produce a thrust of 100,000 pounds. Mace improvements over the Matador included a lengthened fuselage which doubled the vehicle’s fuel capacity. This resulted in increased range and warhead capability. Mace production began in 1958, and there were ultimately two versions of the missile. The Mace A, designated TM-76A, carried a Goodyear ATRAN terrain comparison guidance system. Designed to be carried aboard cross-country mobile trailer-launchers, Mace A missiles were deployed in West Germany beginning in June, 1959. The Mace B, designated TM-76B, carried an AC Sparkplug A-Chiever inertial guidance system. Launched from hardened shelters, Mace B missiles were deployed in Okinawa beginning in 1961. Mace A and Mace B missiles were withdrawn from service by 1966.