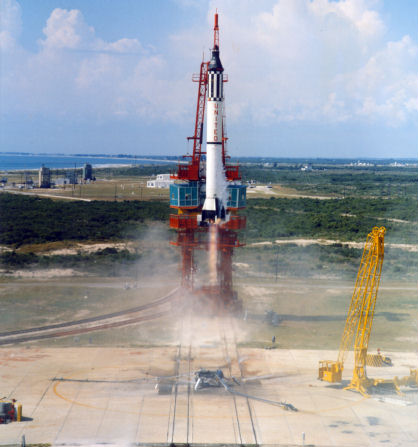 A modified version of the Redstone missile, the Mercury-Redstone was a one-stage rocket used in the initial NASA effort to launch astronauts into space. In most respects, the Mercury-Redstone was quite similar to its missile relative. The vehicle was, in fact, selected by NASA for the Mercury program because of its proven track record of safety and reliability. The Mercury-Redstone did incorporate added safety features, as well as an upgraded Rocketdyne A-7 engine. The liquid oxygen/ethyl alcohol liquid-fueled engine was capable of producing 78,000 pounds of thrust at launch. About 800 engineering changes were made to the production version of the Redstone missile to qualify it as a manned space launch vehicle. These included extending the fuel tank six feet to increase the burn time, thus achieving increased speed and altitude. Other modifications included the addition of an in-flight abort sensing system which would protect the astronaut during an emergency. Alan Shepard, the first U.S. astronaut, was launched aboard a Mercury-Redstone from Cape Canaveral Launch Pad 5 on May 5, 1961 on mission MR-3. A nearly identical flight designated MR-4 featuring astronaut Virgil “Gus” Grissom was conducted on July 21, 1961. Mercury-Redstone mission performance in support of suborbital manned flights MR-3 and MR-4 was so successful that two similar flights which would have been designated MR-5 and MR-6 were cancelled.