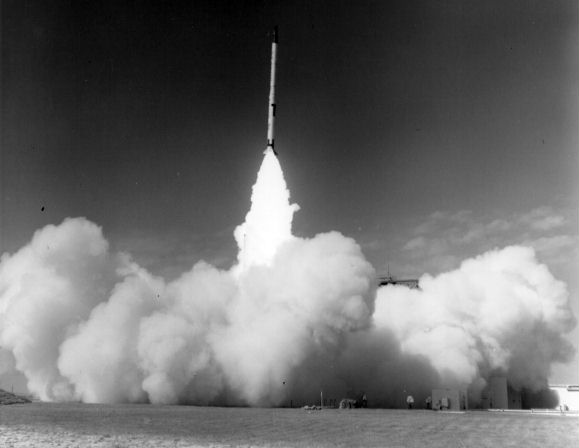 On May 5, 1961, the same day the first U.S. astronaut was launched, NASA issued a document that proposed the use of Scout rockets to evaluate the Mercury tracking and real-time computer network in preparation for manned orbital missions. The proposal was approved on May 24, 1961 and on June 13, 1961 the NASA Space Task Group issued detailed technical instrumentation requirements for the modified Scout rocket, which became known as Mercury-Scout. Each Mercury-Scout rocket would be required to carry a lightweight communications payload into Earth-orbit to allow a simulation of the tracking of an actual orbiting Mercury capsule through the Mercury global network. A decision was made to modify Blue Scout II number D-8 for the first, and what would be the last, Mercury-Scout mission. The launch would be conducted by the U.S. Air Force, which had already begun launching Blue Scout rockets at Cape Canaveral. The Mercury-Scout, performing mission MS-1, was launched on November 1, 1961 from Cape Canaveral Launch Pad 18B. The rocket developed erratic flight 28 seconds after being launched, and was destroyed by the Range Safety Officer after 43 seconds of flight. Mercury program managers subsequently decided that additional missions of Mercury-Scout rockets were not necessary. By the end of 1961, Mercury-Atlas missions MA-4 and MA-5 had already demonstrated that actual orbiting Mercury capsules could be successfully tracked.