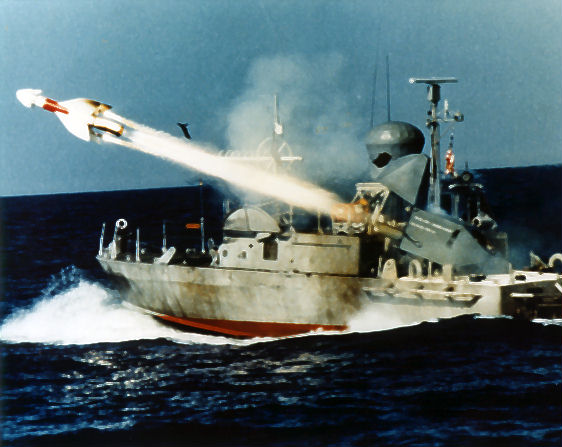 A ship-to-ship missile designed by the Norwegian Defense Research Establishment, the Penguin missile was manufactured in the early 1960’s with the assistance of U.S. research and test facilities, including the range at Cape Canaveral. The Penguin employed a fully passive guidance system, since radio signals from the parent ship or the missile itself could be easily jammed during at-sea operations. A warhead system originally designed for the U.S. Bullpup missile was adapted for use on the Penguin. The warhead was built for the Penguin in Europe under U.S. license. The Penguin was deployed from a box-type launcher attached to a ship-board deck mount. Prior to launch, each missile remained attached to the ship by an umbilical connection. A total of six Penguin missiles were carried aboard Norwegian Storm Class fast patrol boats.

Targets were detected by ship-board instrumentation. Appropriate data was loaded directly to the Penguin’s guidance system, which functioned independently of the ship once the missile was launched. The Penguin’s box-type launcher was opened as the parent ship turned away. Once launched, the missile’s pre-programmed inertial guidance system, coupled with an infrared heat detector, provided automatic homing toward its target. The missile also had the capability of homing in on a target using a passive direction finder which sensed an enemy’s electromagnetic signature.