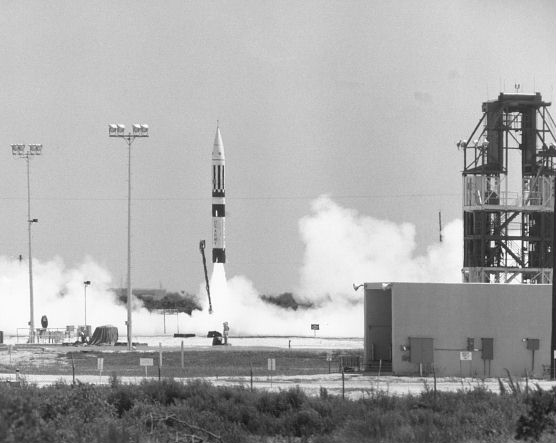 The Pershing program was born in the wake of the “Wilson Memorandum”. In 1956, Secretary of Defense Charles E. Wilson stripped the U.S. Army of all missiles with a range of 200 miles or greater. This policy was rescinded in 1958, which allowed the Army Ballistic Missile Agency (ABMA) to proceed with the development of a solid-fueled missile with a desired range of up to 800 miles. Named after General “Black Jack” Pershing, a contract for the development of the Pershing missile was granted to the Martin Company (later Martin Marietta) Orlando Division. This was the first time that the development of a U.S. Army missile was handed over to an industrial contractor. Previously, the ABMA did not grant a production contract until a missile had been fabricated and tested in-house.

Beginning with the Pershing, the U.S. Army followed an established U.S. Air Force pattern of assigning missile development activities directly to military contractors from the time of conception. Designed as a mobile missile, the first-generation Pershing, called Pershing I, required four vehicles for field deployment. The first vehicle carried the missile itself and an erector launcher. The second housed a programming test and power station. A third vehicle served as a radio communications terminal center, while the fourth contained the missile’s nuclear warhead and azimuth laying equipment. Prior to launch, the Pershing I was raised vertically, the erector arm was lowered and the missile was fired by remote control.

The Pershing I employed two solid-fueled stages. A Thiokol first stage engine produced 26,290 pounds of thrust and burned for about 39 seconds. A Thiokol second stage engine produced a 19,220-pound thrust and also burned for about 39 seconds. An Eclipse Pioneer inertial guidance system directed the Pershing I to its target. The first stage employed three triangular fins, while the second stage employed three rectangular wedge fins to control trajectory during flight. The inertial guidance system controlled the movement of the fins, which acted as exhaust deflectors to steer the missile. A re-entry vehicle, shaped like a sharply tipped cone, employed ablative technology to deliver the Pershing I weapons payload. The re-entry vehicle could carry a 400 kiloton nuclear warhead, effectively delivering the equivalent of 400,000 pounds of TNT.

Although this was considered by critics to be an unusually large payload for an MRBM, the capability was established to assure that as much damage as possible would be inflicted should the missile fall short of its intended target. The first Pershing I test launch occurred on February 24, 1960 from Cape Canaveral. By 1961, all Pershing I test flights were supported by the actual four-vehicle mobile launch system which would be used during field operations. Declared operational in July, 1962 and designated MGM-31A, Pershing I missiles were deployed in West Germany. A similar version of the Pershing I used strictly for troop training was designated MGM-31B.