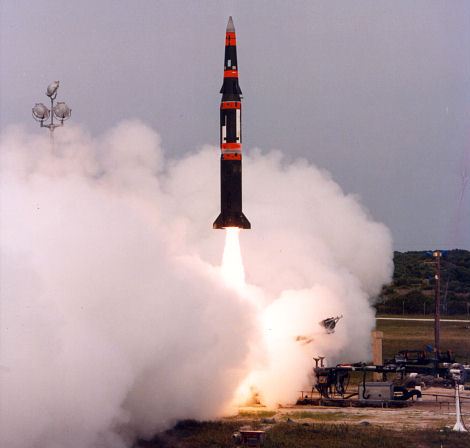 Production of the Pershing II was stepped up in the mid to late 1970’s in response to an increasing Soviet deployment of intermediate to long-range mobile land-based missiles. The first Pershing II test launch occurred on July 22, 1982 from Cape Canaveral Launch Complex 16. A total of 108 Pershing II missiles were subsequently deployed in West Germany from May, 1983 through December, 1985. Test launches for troop training at Cape Canaveral continued as well. A total of six Pershing II missiles were launched from Launch Complex 16 in just one day, setting the record for land-based same-day launches from the Cape. Although the Pershing II represented the first operational IRBM for the U.S. Army since being stripped of the Jupiter missile by the “Wilson Memorandum” in 1956, this capability was to be short-lived. In 1987, U.S. President Ronald Reagan and Soviet Premier Mikhail Gorbacev signed the Intermediate Nuclear Forces (INF) Treaty. The treaty banned all land-based intermediate-range missiles, including the Pershing II. Pershing II missiles would be dismantled and destroyed. Those rendered inert and kept on display, including one at the Air Force Space and Missile Museum at Cape Canaveral, would remain open to random Soviet inspection. The U.S. Army had again lost its IRBM capability, but by treaty rather than memorandum.