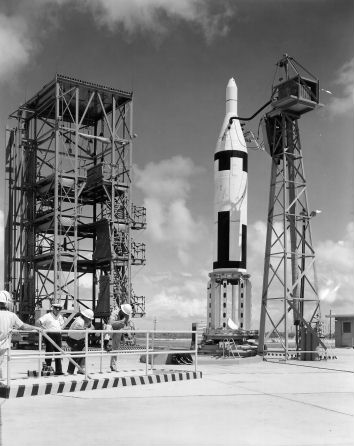 Developed in the late 1950’s, the Polaris family provided the U.S. with its first submarine-based nuclear missiles. The first generation Polaris A1 became the ancestor of a missile family which comprises the backbone of current U.S. nuclear offensive capability. In 1955, the U.S. Navy was directed to participate in a joint venture with the Army Ballistic Missile Agency (ABMA) to create a sea-based version of the Jupiter IRBM. During the course of Jupiter testing, it became clear that the missile’s liquid fuels, especially volatile liquid oxygen, provided an unacceptable hazard during at-sea operations. It was also recognized that the Jupiter, or any similar liquid-fueled missile, was too difficult to maintain and operate either aboard ship or submarine. For these reasons, the U.S. Navy abandoned the Jupiter program in December, 1956. Instead, the option of deploying a solid-fueled missile was vigorously explored.

The need for a sea-based missile using solid fuel, lightweight construction, miniature inertial guidance, small nuclear devices and cold gas ejection from submarine tubes during uncertain environmental conditions provided considerable engineering challenges. With the highest military priority, Lockheed was assigned the task of developing this ambitious missile program. Lockheed selected Polyurethane Ammonium Perchlorate (PU/AP) solid fuel for the two-stage vehicle to eliminate the hazards associated with liquid fuel. In addition, a procedure for gas-propelled launching from submarine tubes was developed to eliminate the hazard of firing the missile’s first stage aboard ship. Test versions of the missile were first known as AX-6, then A1-X, but the name Polaris A1 was ultimately selected along with the military numerical designation of UGM-27A.

Aerojet-General first and second stage engines were encased in a steel frame. The first stage engine had four rotary exhaust nozzles, while the second stage engine had one. Each missile could carry a 500 kiloton nuclear warhead. The missile’s MIT/GE/Hughes inertial guidance system was linked to a GE fire control. A Westinghouse/MIT launch control system activated the high pressure gas flow which forced the missile out of its launch tube. The Polaris A1 was suitable for launching from ships as well as submarines and the U.S.S. Observation Island was outfitted for Polaris A1 launches with 2 missile tubes. The U.S. Navy also ordered a total of 41 Fleet Ballistic Missile (FBM) submarines, with five to be modified from existing submarines and 36 to be built from scratch.