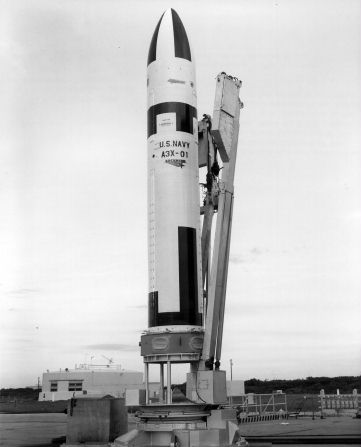 The third and final generation of the Polaris missile, the Polaris A3, was under development in 1960. Designated UGM-27C, the missile was considerably more advanced and had a much longer life than its two ancestors. The Polaris A3 featured a full-diameter re-entry vehicle, which gave the missile a more streamlined appearance than the heavily tapered, small-nosed Polaris A1 and Polaris A2. It also employed a new high-energy Hercules second stage engine which burned Nc/Ng/AP solid propellant and featured a freon fluid injection thrust vector control. For the first time, both the first and second stage engines were housed in glass filament-wound casings as opposed to steel. Only the Polaris A2 second stage had previously used the glass filament-wound casing. A GE inertial guidance system coupled with a GE fire control provided an on-board guidance package that was 60 percent lighter than similar hardware used on the Polaris A1 and A2.

In addition to outfitting U.S. Lafayette Class submarines, Polaris A3 missiles were deployed aboard the British submarines HMS Resolution, HMS Renown, HMS Repulse and HMS Revenge by the mid-1970’s. The British subsequently renamed their Polaris A3 missiles “Chevaline”. A total of 1,409 Polaris missiles were manufactured, including the Polaris A1, A2 and A3. Although Polaris A3 production ceased in June, 1968 the missile continued to be upgraded as necessary. As initially deployed, the Polaris A3 carried a Lockheed re-entry vehicle outfitted with a single 500-kiloton nuclear warhead, as in previous Polaris applications. In the early 1970’s, the re-entry vehicle was redesigned to hold three separate, maneuverable 200-kiloton warheads. Although these warheads could not be independently targeted, they were able to impact up to 2,400 feet away from each other. In 1974, the British Polaris A3 (Chevaline) missiles were improved so that each one could carry a total of six independently targeted, maneuverable 40-kiloton warheads. These warheads could impact up to 50 miles away from each other. The U.S. Navy Polaris A3 missiles were withdrawn from service in February, 1982. The British Polaris A3 (Chevaline) missiles remained in service until the mid-1980’s.