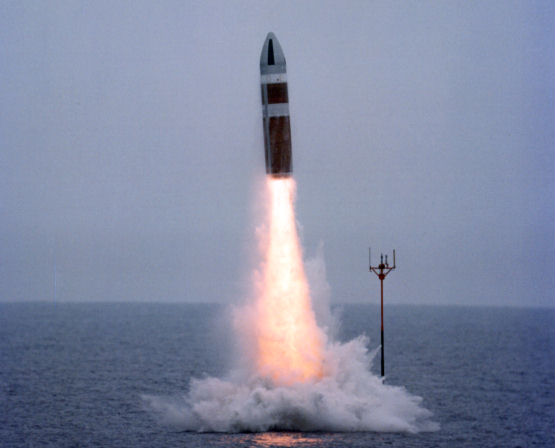 Originally called the Polaris B3, the Poseidon C3 was granted a new name due to some significant technical advances over its Polaris ancestors. Designated UGM-73A, it is acceptable to refer to the Poseidon C3 simply as Poseidon, because unlike the Polaris, only one version of the Poseidon was ever deployed. Tests between 1960 and 1962 determined that glass-fiber liners and locating rings which surrounded the Polaris missiles as they sat in their launch tubes could be safely removed without adversely affecting a missile’s operation. As a result, missiles with a larger width could be safely housed in the same launch tubes used for the narrower Polaris. This allowed the U.S. Navy to deploy a larger, improved Fleet Ballistic Missile (FBM) without having to make major modifications to existing launch tubes.

In addition to being wider than its Polaris relatives, the Poseidon sported a completely new guidance system managed by MIT and built by GE, Hughes and Raytheon. The inertial guidance system was tied to a GE fire control system. Trajectory data was updated continuously by an Autonetics and Sperry Ship’s Inertial Navigation System as the submarine’s position changed. All Poseidon guidance components employed digital microelectronics technology. The gas pressure necessary to force the tightly fitting Poseidon out of its launch tube was produced by steam generated from a solid-fueled water boiler. Under operational conditions, one Poseidon missile could be launched every 50 seconds.

The Poseidon first stage employed a Thiokol/Hercules solid-fueled engine, while the second stage employed a Hercules solid-fueled engine. Both stages were contained in glass filament-wound casings, and each was maneuvered by a single gimbaled exhaust nozzle. Each Lockheed/AEC Poseidon warhead contained a total of ten independently targeted re-entry vehicles, each of which had a 50-kiloton capability. The warhead could be adapted to contain a total of 14 re-entry vehicles, but this configuration reduced the missile’s range to that of the Polaris A3. For this reason, the array utilizing ten re-entry vehicles per warhead was preferred for deployment. The first Poseidon test launch occurred on August 16, 1968. The first submarine-based test launch occurred on August 3, 1970 from SSBN 627 James Madison. The Poseidon was declared operational on March 31, 1971 and was deployed aboard all 31 Lafayette Class submarines. In 1973, Poseidon test launches uncovered some operational flaws in the missile which required a modification program to correct. Poseidon submarines already deployed had their missiles modified upon returning to port. New submarines received an improved Poseidon upon deployment.