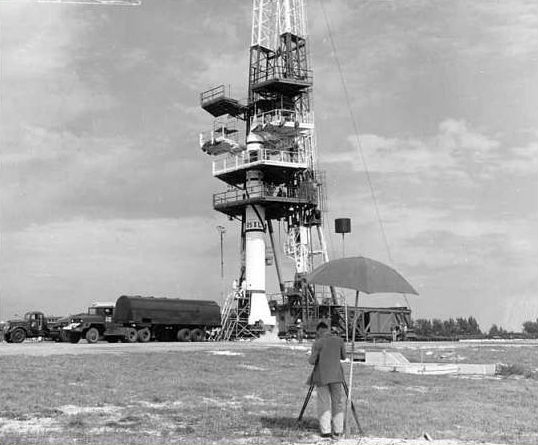 Not only did the Redstone hold the distinction of being the first operational U.S. ballistic missile, it also played a pivotal role in the birth of America’s space program. The Redstone missile was originally a product of the U.S. Army Ordnance Guided Missile Center (OGMC) based at the Redstone Arsenal in Huntsville, Alabama. The outbreak of the Korean War in 1950 coupled with a growing concern over ballistic missile advances by the Soviet Union spearheaded the development of a more advanced version of the German V-2. Since nuclear warheads were still relatively heavy at the time, the Redstone missile was designed to carry a 6,000-pound warhead a distance of 500 miles. The range was later reduced to 200 miles to allow the application of existing Navaho missile engine technology. The Navaho engines reduced the range of the Redstone, but facilitated quicker development.

In 1950, a team of German scientists led by Wernher von Braun was re-assigned to OGMC at Huntsville. Previously, the von Braun team had been based at Fort Bliss, Texas and White Sands, New Mexico. This transfer was an important one for von Braun. Not only did the scientist have a chance to help develop a viable U.S. weapons program, he also was able to fulfill a personal dream of designing rockets which would carry satellites and men into space. The Redstone would prove to be instrumental in both efforts. Initially designated Missile M-8 under Weapons System SSM-A-14, the Redstone was built as a field-mobile missile capable of being launched by combat troops. The Redstone was later redesignated PGM-11A. North American Aviation produced the Redstone engine, which was directly adapted from the Navaho cruise missile. The engine burned a combination of liquid oxygen and a liquid fuel which was 75 percent ethyl alcohol and 25 percent water.

The Redstone engine produced 77,200 pounds of thrust at liftoff utilizing a 780-horsepower turbopump with a precision cutoff mechanism. Trajectory was controlled by four vanes which were attached to four fixed fins at the base of the missile. Each fin supported a single moveable vane each. The vanes moved on pivots which were attached to the inside face of each fin. The vanes deflected the engine’s exhaust to steer the missile. This was a method nearly identical to that employed on the German V-2. Prior to launch, the Redstone was supported on a circular stand. A cone-shaped flame deflector was located directly beneath the stand. The flame deflector helped to keep the missile stable when its engine was fired. Following launch, the Redstone was controlled by an inertial guidance system built by the Ford Instrument Division of Sperry Rand. The system used air-breathing gyroscopes. The re-entry vehicle, carrying a nuclear weapon, separated from the missile following engine cutoff.

The first Redstone was test launched from Cape Canaveral Launch Pad 4 on August 20, 1953. After numerous test flights, the Redstone was declared operational in June, 1958. The ABMA granted a Redstone production contract to Chrysler, and over 1,000 missiles were delivered. Contrary to procedures adopted by the U.S. Air Force, the ABMA fabricated and tested the Redstone in-house prior to issuing a production contract. The Redstone was deployed by Field Artillery Missile Groups (FAMG) in West Germany. Comprised of about 600 people and many large vehicles, each FAMG had to operate a liquid oxygen processing plant which could yield 20 short-tons of the liquid fuel per day. ABMA development and testing of the Pershing missile began at about the same time the Redstone was declared operational. Work on the Pershing progressed very quickly, and it replaced all Redstone missiles in the field by 1963.

Although it had an operational life of only five years, the Redstone remains one of the single most important vehicles in the history of the U.S. space program. The Redstone was used as a first stage booster for the Jupiter C research rocket, which was later renamed Juno I and carried the first U.S. satellite, Explorer I, into orbit on January 31, 1958. In addition, the Redstone was adapted by NASA in an effort to launch the first U.S. astronauts. A modified Redstone missile, mated to a Mercury capsule, successfully carried Alan Shepard, the first American astronaut, into space on May 5, 1961. Although the Redstone was only powerful enough to support sub-orbital manned flights, the vehicle did repeat its historic task as Virgil “Gus” Grissom flew aboard a Mercury Redstone on July 21, 1961.

As a follow-up to the Redstone program, the ABMA continued development of the Juno family of space launch vehicles. With the Redstone as the basis of the first generation Juno I, additional versions to Juno V were designed. The final generation, called Juno V, was to employ a first stage array of eight Redstone missile stages clustered around one central Jupiter missile stage. Although the Juno rocket family was renamed Saturn, the Saturn I bore great resemblance to the proposed Juno V. In essence, the Saturn rockets which were instrumental in the effort to carry the first men to the Moon were direct descendants of the Redstone vehicles which had already triumphantly carried the first U.S. satellite and the first U.S. astronaut into space. 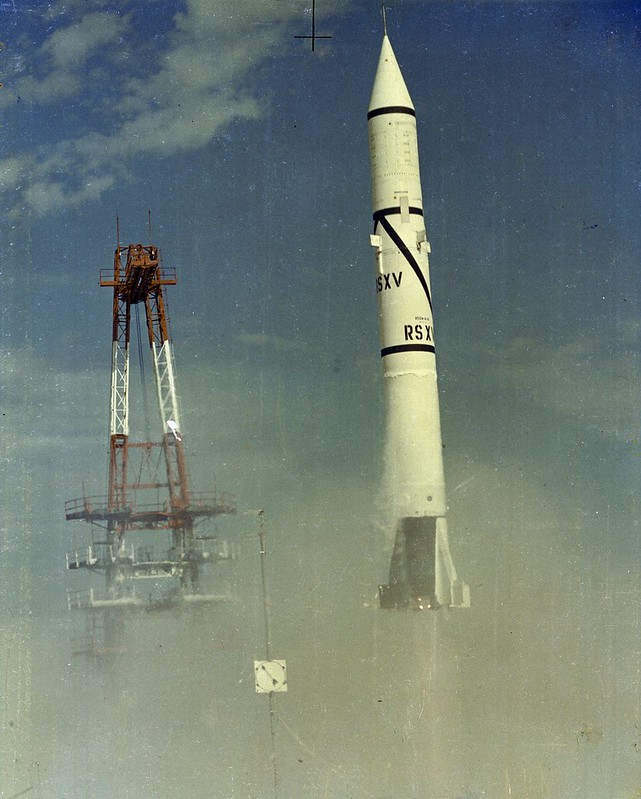