SATURN I BLOCK I FACT SHEET 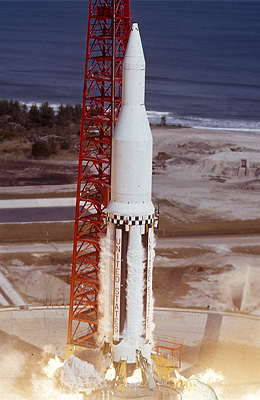 Conceived as an element of the short-lived Juno class of space launch vehicles, the rocket which would become the Saturn I was born on the drawing boards of the Army Ballistic Missile Agency (ABMA) in 1957. At the time, an ABMA design team led by Wernher von Braun envisioned a heavy lift rocket with a powerful first stage made up of a cluster of eight Redstone missile stages surrounding one Jupiter missile stage. The pioneering clustered engine concept was referred to by critics as “cluster’s last stand” because some believed the resulting rocket would not be able to get off the ground. Each of these clustered stages was to be fitted with a Rocketdyne engine adapted from the U.S. Air Force Thor missile program. The nine-engine first stage array would be capable of producing about 1.5 million pounds of thrust at liftoff. This design represented the first attempt to increase a rocket’s payload capacity by clustering existing missile stages. The ABMA had indeed presented an extremely challenging and advanced rocket concept with far-reaching implications for the future of space flight.

In August, 1958, the Advanced Research Projects Agency (ARPA) issued an official authorization for the ABMA to develop a rocket with a clustered first stage under the designation Juno V. Redstone-based Juno I and Jupiter-based Juno II rockets had already been successfully developed. Although concept vehicles known as Juno III and Juno IV were also under active review at the time, development of these rockets never occurred. There was a possibility that the eight Redstone stages and one Jupiter stage which made up the Juno V first stage array could have been used simply as fuel tanks to feed four upgraded Rocketdyne engines, each of which could produce 330,000 pounds of thrust at launch. However, a decision was made to continue Juno V development using Rocketdyne Thor engines as originally conceived. Rocketdyne later introduced a more simplified and compact new engine called the H-1 which was actually employed in operational vehicles.

The large size of the rocket became an engineering challenge at the outset. It was originally proposed that the clustered first stage tanks be manufactured separately from the main body of the vehicle, then attached to the main body at the launch site. This design was considered due to the limitations of transport aircraft at the time, which could not accommodate a payload more than ten feet in diameter. Further review indicated it would take as many as 11 C-124 aircraft flights to transport the rocket components from Huntsville, Alabama to Cape Canaveral for each vehicle, which was deemed inefficient and overly expensive. Attaching the individual clusters at the launch site was also considered to be too time consuming and risky. In the end, the rocket was manufactured with all of its component clusters affixed to the main vehicle body, with the entire first stage transported from Huntsville to Cape Canaveral by barge. These were the first rocket components to be transported to Cape Canaveral in this manner.

In October, 1958, Wernher von Braun suggested that the Juno V be renamed Saturn. Since the rocket was dramatically different from the Jupiter-based Juno II, he felt the name was appropriate since the planet Saturn is the next “step” away from the planet Jupiter. The ARPA approved the name change on February 3, 1959. Later that year, another significant change was in store. On October 21, 1959 the ABMA Development Operations Division, including the Saturn rocket program and Wernher von Braun, was transferred to NASA. This was the logical direction for the Saturn program to take. Although the Army had conceived and designed the vehicle, they had no application in which to use it. Although the Army had proposed several of its own rather fanciful manned space flight programs which could employ the Saturn rocket, these programs never materialized after a civilian space program emerged.

NASA, on the other hand, had already embarked on an ambitious manned space flight program, which was intended to send men to the Moon and back at some point in the near future. Since the Army had a rocket with no program and NASA had a program with no rocket, NASA inherited the Saturn program intact. With the ultimate configuration of Saturn rockets still in the design stage, a government Saturn Vehicle Evaluation Committee, known as the Silverstein Committee, recommended that NASA consider three options for the vehicle. These options were called Saturn A, Saturn B and Saturn C. These represented a hodgepodge of heavy lift vehicle options using a wide array of upper stage configurations based on existing technology, built around the Army clustered first stage concept. Of these, the Saturn C option was selected. Five versions of the Saturn C, numbered Saturn C-1 through Saturn C-5, ranging from the least powerful to the most powerful, were proposed.

With veteran Redstone and Jupiter producer Chrysler serving as prime contractor, the Saturn C-1 was readied for flight testing by 1961. Flight tests occurred in configurations called Block I and Block II. In the Block I configuration, a live first stage was flown. A dummy second stage, made up of an inert Jupiter missile shell ballasted with water, was attached atop the first stage to provide aerodynamic stability. As per Juno V design plans, the Saturn C-1 first stage was made up of eight Redstone stages surrounding one Jupiter stage. But unlike the original plans for the Juno V, these stages acted as fuel tanks only, and did not contain engines at the base of each.

A total of eight Rocketdyne H-1 engines were employed in the first stage, which was called S-1. These were located at the base of the Saturn C-I in two squares of four engines each. Four of the H-1 engines comprised a tight square at the center of the rocket’s base. The remaining four H-1 engines were located on outside “corners” of the base, creating the appearance that one larger square of engines surrounded a smaller square of engines. Four of the Redstone stages and the Jupiter stage contained liquid oxygen. The remaining four Redstone stages carried RP-1 (kerosene) liquid fuel. A combination of these fuels fed the eight H-1 engines. The first four Saturn I vehicles were launched in the Block I configuration, employing a first stage capable of producing a thrust of about 1,330,000 pounds at launch. These launches were chiefly intended to test the flight dynamics of the vehicle and the reliability of the first stage clustered configuration. The Saturn C-1 was renamed Saturn I in February, 1963 prior to the vehicle’s fourth test flight. The “C” was also dropped from the other Saturn rockets, which became Saturn IB and Saturn V. As a result, even Saturn C-1 launches which occurred prior to the name change are now referred to as Saturn I. 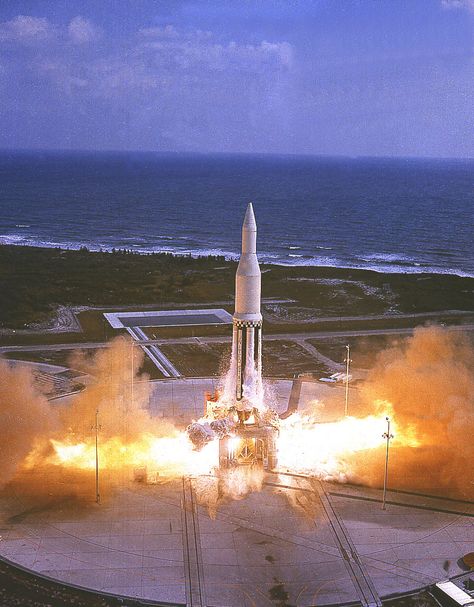