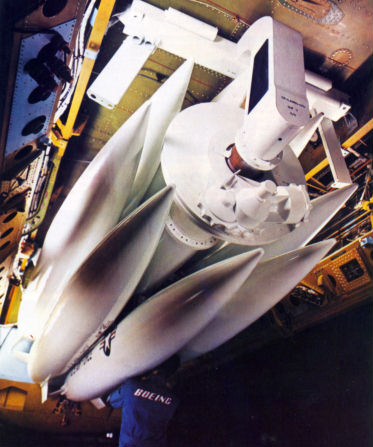 The SRAM, or “Short Range Attack Missile”, was proposed in 1960. The reduction in the size and weight of nuclear payloads made the development of this small, lightweight aircraft-deployed missile feasible. Designed to be carried aboard Strategic Air Command (SAC) aircraft, the SRAM was intended to carry small but potent nuclear weapons a distance of about 100 miles. The missile would primarily be deployed to destroy or neutralize enemy defenses such as radar sites, missile bases and air bases. Since the SRAM was relatively small, as many as 44 missiles could be carried on a single aircraft. This vastly increased the number of targets that one aircraft could attack during a single engagement. Boeing was selected by the U.S. Air Force to begin SRAM feasibility studies in December, 1963. At this time, the SRAM was classified under Weapons System-140A (WS-140A).

In October, 1966, Boeing was awarded a production contract for the SRAM, now designated AGM-69A. A dummy prototype of the SRAM was first dropped from an aircraft in December, 1967. Live test flights of the SRAM commenced in 1969. The SRAM was declared operational by early 1972. Boeing completed a production run of 1,500 missiles by July, 1975. Carried aboard B-52G, B-52H and FB-111A aircraft, SRAM missiles were flown out of a total of 18 SAC bases. Inertial guidance of the SRAM was provided by a Singer-Kearfott system, with a Delco on-board computer allowing four different flight profiles for each missile. The SRAM was quite hard to detect by enemy radar because of its small, streamlined size. In fact, the missile in flight was as hard to detect as a bullet.

Each B-52 aircraft could carry eight SRAM missiles on a rotary launch “revolver” cylinder carried in the aft bomb bay. In some instances, up to three more identical cylinders could be carried internally. This array provided a maximum of 32 missiles, excluding wing deployment. Pylons located under each B-52 wing were first built for Hound Dog missiles. These pylons, one under each wing, were modified to carry six SRAM each. The pylons thus accommodated a total of 12 missiles, creating a maximum SRAM capability of 44 missiles per each B-52. Each FB-111A aircraft could carry a maximum of six SRAM. Four missiles were located on swiveling wing pylons, while two missiles could be carried internally. A Lockheed two-pulse solid rocket motor fired the SRAM to a maximum speed of Mach 3. Each SRAM carried a warhead with the capability of delivering a maximum 200-kiloton nuclear payload. U.S. Air Force plans to develop an improved SRAM designated AGM-69B were scrapped in 1976. Instead, a decision was made to periodically upgrade the existing SRAM fleet as technology advancements were made available.