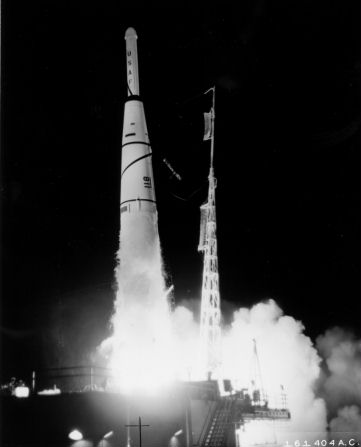 Using the Thor IRBM as a core booster, the Thor-Able 0 rocket was introduced in 1958. The vehicle was originally designed to support high-altitude U.S. Air Force and civilian re-entry vehicle research. The Thor-Able 0 was later modified to carry small satellites into orbit, and became the first Thor-based variant to do so. Thor-Able 0 was the first generation of what would become the Delta family of space launch vehicles which remain in use today. The Thor-Able 0 employed a Rocketdyne first stage engine which burned liquid oxygen/RP-1 (kerosene) liquid fuel and could produce 150,000 pounds of thrust at launch. The second and third stages were adapted directly from the Vanguard rocket. An Aerojet second stage engine burned IRFNA/UDMH solid fuel and could produce a 7,575-pound thrust. An Altair solid-fueled third stage engine could produce a thrust of 2,760 pounds.

The first three Thor-Able 0 rockets were launched from Cape Canaveral in support of the Atlas missile research and development program. These Thor-Able 0 rockets were powerful enough to duplicate the intended Atlas full-range flight distance of 6,000 miles. For this reason, Thor-Able 0 rockets were selected to produce high speed re-entry data of the ablative-type heat resistant material proposed for Atlas missile nosecones. But in addition to supporting the tests of vital Atlas missile hardware, these Thor-Able 0 flights also carried out some groundbreaking biological research. Each of the three nose cones launched in this test series carried a lone mouse as passenger. Electronic monitoring of these mice would determine whether or not animals could survive a long-range missile flight. These tests would prove to be significant since the mice would reach maximum altitudes of 600 to 1,000 miles above Earth during their journey, and experience long periods of weightlessness and gravity stress.