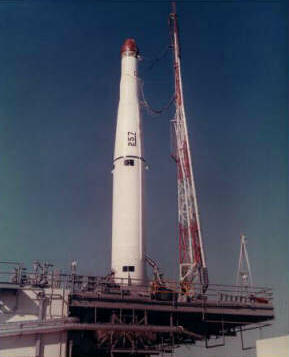 Introduced in 1960, Thor-Able Star was a two-stage vehicle designed to carry military payloads into orbit. Employing improved Thor-Able first and second stages and eliminating the weight of additional upper stages, Thor-Able Star was able to carry a maximum 1,000-pound payload into low-Earth orbit. A Rocketdyne first stage engine burned liquid oxygen/RP-1 (kerosene) liquid fuel and could produce 172,000 pounds of thrust at launch. An Aerojet second stage engine burned IRFNA/UDMH solid fuel and could produce a 7,730-pound thrust. This upgraded engine could be re-started to augment and adjust the orbit of the payload. Thor-Able Star was the last version of the Thor-based rockets to be launched from Cape Canaveral carrying the “Thor” name. In 1960, an improved Thor-based rocket called the Thor-Delta was introduced. The name of this vehicle was officially shortened to Delta in order to distinguish it from military relatives which continued to carry the Thor name. From this point on, all Thor-based rockets launched from the Cape carried the Delta name only. However, military vehicles carrying the Thor name continued to be launched from Vandenberg Air Force Base, California.

Rockets launched from Vandenberg Air Force Base, California, but never launched from Cape Canaveral, include the Thor-Agena A, Thor-Agena B, Thor-Agena D, Thor-Altair, Thor-Burner II and Thor-Burner IIA. Indeed, military variants of the Thor-based rockets continued to evolve following the elimination of the Thor name from Cape Canaveral launches. This evolution affected the Delta fleet as well. The Thrust Augmented Thor (TAT) Agena D was introduced in 1963 by adding three Castor solid rocket boosters to augment the first stage of the Thor-Agena D. This method of thrust augmentation was incorporated into the Delta program beginning with the introduction of the Delta D launch vehicle in 1964. The TAT-Agena D was later improved by lengthening the first stage fuel tanks. The resulting rocket was called Long Tank Thrust Augmented Thor (LTTAT) Agena D. The LTTAT-Agena D was alternately referred to by the shortened names Thorad and Long Tank Thor. The vehicle remained in operation until 1972. From 1972 on, military and civilian satellites were both launched on vehicles bearing the Delta name. It should be noted that although the Thor designation was officially removed from the Delta fleet in 1972, some sources continued to refer to the “Thor-Delta” in reference to Delta launches taking place well beyond that date.