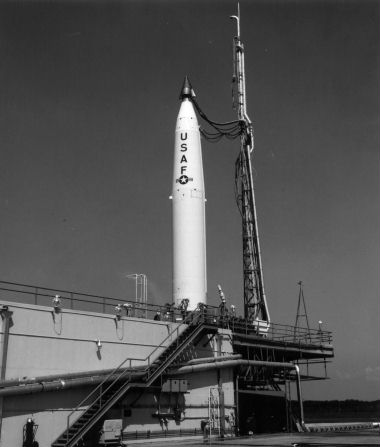 Thor Asset was a Thor ballistic missile fitted atop with an ASSET payload. ASSET, or Aerothermodynamic elastic Structural Systems Environmental Tests, was an Air Force program intended to test characteristics of a high-speed re-entry vehicle. The ASSET program investigated the effects of vibration and temperature changes on the shape and materials of experimental hypersonic flight craft which employed a glide concept of re-entry. Six delta-winged ASSET vehicles were built by the McDonnell Company. Each was 6 feet long with a diameter of 5 feet, 6 inches weighing 1,000 to 1,200 pounds. Each was small enough to be launched atop a Thor missile yet large enough to produce useable aerodynamic data in flight. ASSET vehicles were built in two types: the ASSET ASV, or aerothermodynamic structural vehicles, and the ASSET AEV, or aerothermoelastic vehicles. The ASV investigated temperature and pressure effects, while the AEV investigated responses to forces within the atmosphere. At the moment of separation from the Thor missile booster, the ASSET vehicles achieved a speed of anywhere from Mach 12 to Mach 19 at altitudes of 200,000 feet. During the glide toward Earth, cold gas reaction systems controlled the path of the vehicles. Data was telemetered to ground stations. The ASSET program yielded valuable hypersonic flight data which was applied to a number of programs intended to validate the precise re-entry and landing of orbiting spaceplanes.