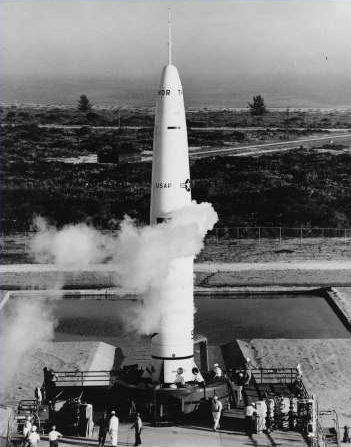 In addition to giving the U.S. Air Force a potent weapon to augment its ballistic missile arsenal, the Thor IRBM laid an important foundation for the U.S. space program as it formed the basis of the long-lived Delta rocket family. Development of the Thor was authorized in November, 1955 to give the U.S. Air Force an independent IRBM capability. At the time, the U.S. Army Ballistic Missile Agency (ABMA) was well underway in the development of the Redstone MRBM and Jupiter IRBM. Since the U.S. Air Force was now authorized to, in effect, compete with the U.S. Army in the development of an IRBM weapons system, a fierce rivalry between these two branches of service erupted. Although it was designed to be operationally similar to the Jupiter IRBM, the Thor weapons system incorporated fixed service structures in the field. Associated service equipment accounted for 87% of the overall development costs of the Thor. The Jupiter program was more streamlined and was designed as a fully mobile weapons system with relatively simple launch stands and servicing requirements. Another striking difference between the Thor and Jupiter concerned the process of producing the missiles. ABMA designed, tested and built their missiles in-house. A production contract was not issued until this entire process was completed and a final design was approved. In contrast, the U.S. Air Force issued its production contract as soon as a design concept was approved. Design, testing and construction of the vehicles was placed in the hands of the selected contractor.

A complete system contract for the Thor was granted to Douglas Aircraft in December, 1955. Initially, it was clear that the U.S. Air Force was in a race with ABMA in securing funding for its fledgling IRBM program. Intense and bitter political maneuvers were carried out by each side. However, the final blow in this conflict was struck fairly early on in the development of the Thor. The 1956 “Wilson Memorandum” issued from the Pentagon stripped the U.S. Army of all missiles with a range of 200 miles or greater. The U.S. Air Force vigorously pursued its Thor program. ABMA also continued development of the Jupiter, but the U.S. Army would never be able to deploy the missile in the field. Rather, ABMA would act as a contract supplier of Jupiter missiles to the U.S. Air Force. In effect, the “Wilson Memorandum” authorized the U.S. Air Force to continue the development of two separate IRBM weapons systems. With some of the intensity in the rivalry between the U.S. Air Force and ABMA thus reduced, the Thor was granted the highest national priority alongside the Atlas ICBM.

Under Weapons System-315A (WS-315A), the Thor was given a numerical designation of SM-75. Final design of the missile was completed in July, 1956. At this time, a production line of Thor prototypes was displayed in the Douglas Aircraft factory in Santa Monica, California. The first production model of the Thor was delivered to the U.S. Air Force in October, 1956. At just 11 months, this represented the shortest span of time from conception to delivery for any U.S. missile program. A full two-thirds of the Thor body held liquid fuel for the missile’s single-stage engine. A gimbaled Rocketdyne engine, fed by liquid oxygen/RP-1 (kerosene) liquid fuel, could produce 150,000 pounds of thrust at launch. This thrust capability was similar to both the Jupiter IRBM engine and each individual Atlas ICBM booster stage engine. All of these engines were derived from the Navaho cruise missile program. Two Rocketdyne vernier engines were attached at opposite sides of the base of the Thor. The vernier engines, similar to those used on the Atlas ICBM, burned the same fuel as the main engine and could each produce a 1,000-pound thrust. They adjusted roll and velocity.

Inertial guidance for the Thor was provided by an AC Sparkplug system utilizing liquid-floated gyroscopes. To save development costs, the Thor carried a copper heat-sink re-entry vehicle which was originally designed for the Atlas ICBM. Beginning on January 25, 1957, the first four Thor test launches were failures. However, a number of successful test flights followed intensive studies of these early failures. The Thor was declared operational by 1959. Operational deployment was assigned to the United Kingdom, with the first Thor delivered to RAF Feltwell in December, 1959. A total of 20 squadrons equipped with three Thor missiles each were deployed from Yorkshire to Suffolk, England, by 1961. In the wake of significant advances in ICBM technology, Thor missiles were withdrawn from service by 1965. Despite unbecoming inter-service rivalry and a short life as a weapons system, the Thor remains a critical vehicle in the evolution of the U.S. space program. The missile acted as the core booster for many satellite-carrying relatives, not the least of which was the Delta.