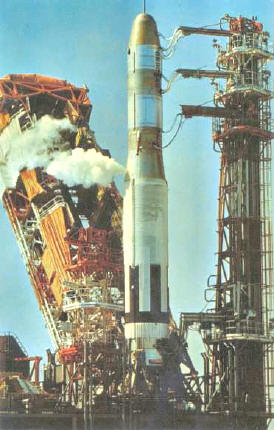 The largest missile ever deployed by the United States, the Titan II also logged distinguished service as the core booster for the NASA Gemini manned space flight program. Following the Soviet launch of Sputnik I on October 4, 1957, U.S. military officials confirmed that their “cold war” adversary possessed potent ICBM technology. Clearly, the U.S. would need to meet this threat with ICBM technology surpassing that of the Atlas and Titan I. In 1958, the Martin Company (later Martin Marietta) proposed an improved version of the Titan I which would burn fuels that could remain stored in the missile’s fuel tanks for long periods of time. This effectively made the missile ready for near-immediate launches, since the need for pre-launch fueling operations would be eliminated. The U.S. Air Force granted a development contract to the Martin Company in late 1958. A production contract followed in June, 1960. The resulting ICBM was designated SM-68B and named Titan II. The missile was vastly more advanced than the Titan I.

Aerojet-General first and second stage engines based on those of the Titan I were modified to burn a combination of unsymmetrical dimethyl hydrazine (UDMH) as fuel and nitrogen tetroxide as oxidizer. These fuels could be stored at room temperature for months with neither evaporation nor corrosion. And, since these fuels were hypergolic, or ignited when they came into contact with each other, the Titan II did not need to employ a complex ignition system. The Titan II first stage employed an Aerojet-General twin-chambered engine, with each individual chamber capable of producing a 216,000-pound thrust. An Aerojet-General second stage engine could produce a thrust of 100,000 pounds.

Designed to be launched from the bottom of an underground silo, each Titan II could be readied for launch in under 60 seconds. A pure inertial guidance system from AC Sparkplug and IBM controlled the Titan II in flight. A GE re-entry vehicle could carry an 18 megaton warhead, providing nearly five times the destructive capability of the Titan I. The first Titan II was launched on March 16, 1962 and the entire missile system met all of its test objectives. The Titan II was declared operational in 1963 under the numerical designation LGM-25C. A total of 54 Titan II missiles were deployed in six separate squadrons each responsible for nine missiles. Two squadrons were located at Davis-Monthan Air Force Base, Arizona, two were located at Little Rock Air Force Base, Arkansas while two squadrons were located at McConnell Air Force Base, Kansas. With a relatively long life as a weapons system, the Titan II fleet was continuously maintained and upgraded through the early 1980’s. Deactivation of the Titan II fleet began in 1982, and was completed by 1987. Remaining Titan II missiles were modified for unmanned space flight as the Titan II-B and Titan II-G. Neither of these were ever launched from Cape Canaveral. However, early in its career, the Titan II was modified to act as a core booster for the NASA Gemini program.