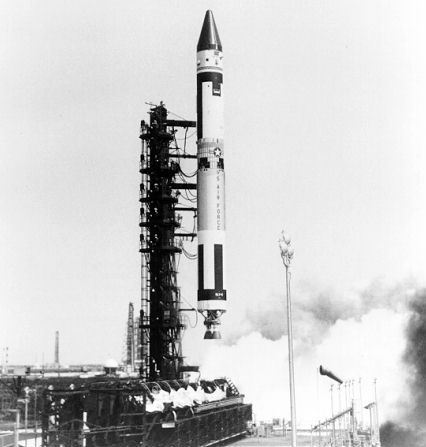 The Titan III family of space launch vehicles was born out of a need for rockets capable of carrying payloads heavier than those which could be handled by the Atlas-Centaur. Introduced in 1964, the Titan III class of rockets was given a numerical designation of SLV-5. The first of these rockets, the Titan III-A, was basically a Titan II ICBM with an added third stage called a Transtage. The Transtage employed twin Aerojet engines which burned Aerozine 50/Nitrogen Tetroxide liquid fuel. Each engine could produce an 8,000-pound thrust, giving the Transtage a total thrust of 16,000 pounds. The overall vehicle could carry a 3,300-pound payload to low-Earth orbit. The Titan III-A was later modified to carry an Agena third stage in a version introduced as the Titan III-B Agena. The Titan III-B Agena, however, was never launched from Cape Canaveral.